← Successful Recovery and Relapse Prevention
The Secrets We Keep → 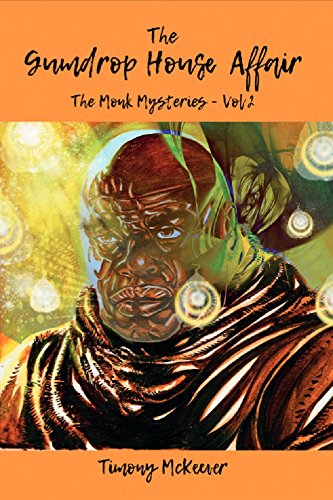 The Gumdrop House Affair, volume 2 in The Monk Mysteries, takes readers on a journey from the untimely death of Saul Greenberg, the financial officer for the Diocese, through the gruesome discovery of a horribly decomposed body no one can seem to explain, to the recurring appearance of the menacing turquoise eyes. Timony McKeever’s characters, Sergeant Jack Laskey and Father William Butler are both painfully aware of the presence and part played in the string of violent acts by the evil they refer to as “The Ugly.” Somewhere between Aunt Rhoda’s World Famous Apple Cobbler and Mona Monahan’s famed Gumdrop House lies the answer to the Laskey and Butler’s questions.

Mysteries top my preferred reading list, and The Gumdrop House Affair ranks among my favorites of recent years. Not having read volume 1 in the The Monk Mysteries, I don’t feel that I was lost. Readers need not read the first installment to fall nicely in step alongside Laskey and Butler as they struggle against “The Ugly.” McKeever does an excellent job bringing readers up to speed on his main characters’ backgrounds.

By far, the McKeever’s character, Aunt Rhoda, is my favorite among the many players in this work. Her strength and no-nonsense attitude permeates every scene in which she is featured. She is capable of curing most any ill with her frying pan alone–that includes the odd home invasion.

The Gumdrop House and its proprietor, Mona Monahan, are as unique as they are colorful. The Gumdrop House is a place of refuge and operated by Mona with open arms and no judgements. Mona is yet another of the author’s strong female characters. The account she relates of her face-to-face encounter with her grandfather, a mobster in his own right, demonstrates her tenacity.

Dialogue is one of McKeever’s most obvious strengths. The author transports readers to the scene of the crime with the colorful conversations between Laskey, Mona, Paisley Bob, and the rest of his lengthy list of players. Nowhere is this more evident than in the most violent and climactic scenes. I am not a fan of excessive profanity, but McKeever uses it sparingly enough and in the most appropriate circumstances to drive home his characters’ emotions.

Within The Gumdrop House Affair, the author intersperses an added layer of first person observations of Deputy Chief Thomas Dugan between authentic dialects and heated exchanges in order to explain his characters’ choices and actions. I truly appreciated this additional twist in McKeever’s writing. He gives his writing the feel of the classic detective novel with these ventures into the mind of one of his characters. This introspection is a welcome addition to the already engaging tale.

Fans of the mystery genre will not be disappointed with Timony McKeever’s police drama. Each of his characters has a rich personality and is portrayed in vivid detail. The multifaceted plot addresses everything from inherent evil to the corrupt dealings within the Catholic church itself. From beginning to end, McKeever’s mystery installment is laced with humor and brimming with everything that makes for an authentic and enjoyable thriller.

← Successful Recovery and Relapse Prevention
The Secrets We Keep →