The Three Lives of One 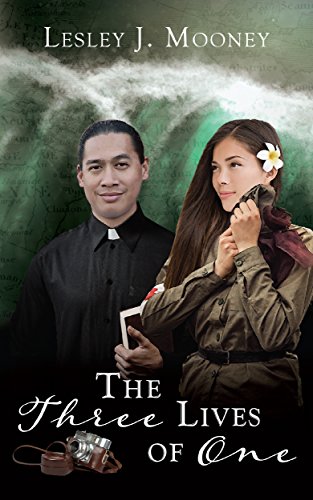 A massive tsunami destroys the island home of a little girl. Left without a family, she is rescued by missionaries who name her ‘Patchula’ or ‘Patches’ and take her to Darwin, Australia. What follows is a story of misfortune and tragedy; adoption, death, abuse, forced prostitution, but also of hope as Patches finds joy and meaning, especially in her talent for photography and singing, in spite of the pain. Spanning Australia, America and Japan The Three Lives of One by Lesley J. Mooney is a sweeping tale which carries us across time and continents in search of love and fulfillment.

The book is written in beautiful yet un-flowery prose which is at times poetic. Mooney conjures up place incredibly well, and I found the movement between different continents particularly fascinating –the depiction of the sights, sounds and geography of these places gave me total wanderlust! The description of the tsunami and the wreckage and devastation that follows is extremely affecting and pulled me into the narrative immediately. Mooney is also skilled at portraying her time periods, which begin in the 1920s and move to the 1980s, and the changing biases and turbulent politics of the times.

There are many themes running through the narrative including womanhood, nature and environment, religion, the importance of family, and the value of keeping faith and resilience in times when despair seems never-ending. Although many terrible events occur in Patchula’s life, the book is ultimately about hope in the face of the unknown and what we can achieve if we have the strength to carry on.

Mooney has written a large and diverse cast of characters, and the world she has developed seems utterly real. Patches in particular leaps off the page as a fully-formed individual. Some of the mistreatment she endures is quite harrowing and difficult to read, but it feels very honest. Her hardships elicit great empathy in the reader; I was constantly rooting for her to overcome all of the tragedy in her life and felt completely invested in her development. The more peripheral characters are also well-drawn and prove to be quite emotive, some invoking feelings of intense anger!

One aspect of the book that bothered me slightly was the pacing. We are introduced to Patchula’s predicament, and the narrative subsequently moves very swiftly through the first part of her life and I would have liked this introduction to the story to be slightly more drawn out. Despite this, the rest of the book has a really good tempo, and because there are so many unexpected twists and turns I was always eager to find out what would happen next in Patches’ story.

This book moved me to tears, but it also gave me a great sense of hope. I finished it feeling as though I had been on a long journey–and an extremely rewarding one at that.