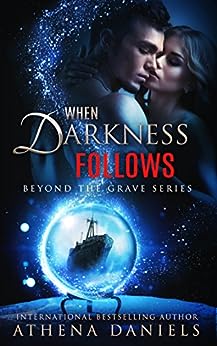 As they say, curiosity killed the cat. Rachel, Rob, and Trey, members of the trio band Trinity Beat have an interest in haunted stories and ghost sightings. One day after having visited their friend Woody – who was responsible for telling them the tale about the ship that came ashore in their town in Australia – they decided to check it out themselves. The next thing that happened, Trey was dead. Did Rob really kill him? Was it Rachel? Or was it something darker?

When Darkness Follows by Athena Daniels is a story about a group of friends sneaking into a haunted shipwreck only to disturb a dark force that will change their lives and relationships. I enjoyed how every time a mystery is about to get solved another problem comes up subtlety. Just like when they were about to solve the mystery of the dead captain, Rachel’s sister Elise reveals her own battle. Another one is when Rachel tended to Sally and suddenly something happens in Liam’s room – which reminded me of Game of Thrones’ Hall of Faces – and things just got worse.

I feel like there were good amount of time and development spent on each character, making each one feel unique and interesting. While that’s the case, I would of like more focus to be put on Pia, the psychic. She helped and was a big part of it but I didn’t get to know her character as well as the others. She felt like all business to me. Perhaps that was the intention, but she was an interesting character that I wanted to learn more about.

My favorite moments in the book are Rachel and Daniel’s. The thrill of him having to face somebody who left him hanging and hasn’t been returning his calls since then; of her facing the person she loves but couldn’t. Shouldn’t. The chemistry between them is so strong that often times during their exchanges and steamy sessions I forgot this was a paranormal book.

If you can imagine yourself reading paranormal with romance, steamy scenes and heartbreak then you got to grab When Darkness Follows. This is the 4th book of a series. For me, that makes it even better because while it is ideal to have read the previous three, it still felt like it was standalone. I didn’t feel like I was missing a backstory.