← Darkness in the Mirror
Faithful to Egyptian Style →

Further Down the Rabbit Hole

Spare No One is a thrilling mystery novel that details a bloody trail leading to a ruthless killer. What was the initial idea behind this story and how did that transform as you were writing the novel?

I came up with the initial idea for Spare No One after my criminal law class in which we learned about one’s duty to act (or lack thereof). I’d always wanted to write a murder-mystery, and I felt what l learned in my class was a great way to start the story. I also wanted to write a tale of revenge, which came naturally after I wrote the first chapter. Idea after idea kept popping up as I wrote, and further down the rabbit hole we went. I definitely had a lot of fun writing this story!

What were some themes that you felt were important to highlight in this story?

Selfishness is a big theme. Taking someone else’s life is one of the most selfish things someone can do. Unfortunately, as in real life, a lot of the unselfish characters suffer in the story.

Love is another theme, and what it means to truly love someone. What would you do for them? How far would you go? Do we sometimes create an illusion of love in our minds?

I felt that there were a lot of great twists and turns throughout the novel. Did you plan this before writing the novel, or did the twists develop organically writing?

After I wrote the first chapter, I had a general idea of how I wanted it to end. Right away I thought of one of the bigger twists, which happens toward the end of the story, so I knew where I wanted to go but not exactly how I’d get there. The middle of the book had the most planning and brainstorming. After that, everything came together.

Will this novel be the start of a series or are you working on a different story?

I have ideas for a few different stories that involve some of the surviving characters from Spare No One. I’ve started writing one of those ideas, but it’s lower on my list of priorities behind a sequel to Stalker, My Love, a legal thriller/romance, and a young adult survival story. I would love to write another book in the Spare No One universe. I’ll get there eventually! 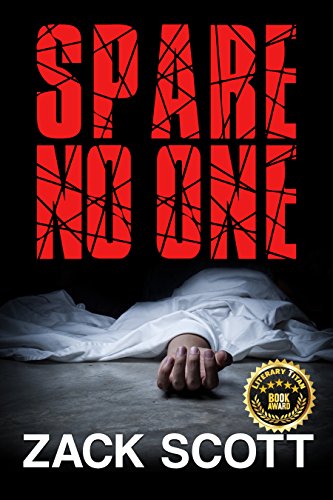 On her way home from studying for college finals, hardworking Ashley Mercer is attacked and killed outside her apartment complex. Thirteen witnesses to the murder do nothing to save her. Days later, one of the witnesses is found dead .

Detectives Alex Mercer and Samantha Stoll search for the truth behind the witness’s death. However, Alex is Ashley’s brother, and his personal struggles may jeopardize the investigation, while Samantha’s own demons plague her.

As the body count rises, the detectives travel down a path of violence and betrayal, leading them to a killer who will spare no one.

← Darkness in the Mirror
Faithful to Egyptian Style →