Portals in Time: The Quest for Un-Old-Age 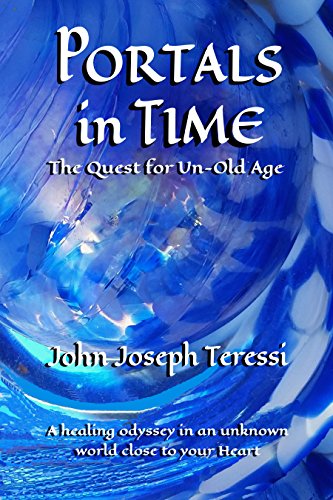 In the book Portals of Time, The Quest for Un-Old-Age, a team of ten Gripps were put together from the prison system to travel to other times, universes, or even dimensions to find the answer to the question, “how do we get more time”? The problem with their society was that people were aging before their time and, diseases of the elderly were showing up in the youth. Many teams were sent out to find information to Un-Old-Age some came back and some didn’t, the teams that came back with helpful information were pardoned from prison. Each team member had a talent or unique knowledge that was essential to the success of the mission.

This team, the Eye of Time Exploration Team, landed on Acronos. Upon first landing they have to travel across a sea and are attacked by sea monsters feeding off of their fear and when they reach the main land they encounter the guardians of this mystical land in the form of two dogs that will ultimately be their guides through this strange world. The team goes through a series of events known as: Hedges of Hedora, the river of time, the forest, time warps, and time vortexes, as well as meeting teachers, Bo and Ben, Fabius and Filloloper, along the way that give them the answers to Un-Old-Age in riddles but ultimately the team has to figure out what the messages are. It is never outright told to them. Each Gripp takes a different amount of time to learn the lesson but there are always a couple that never get it.

The book was hard to put down, I would spend hours at a time reading it. It covers so much indirectly and directly at the same time when it comes to society, spirituality, and the mentality of a society as well as our society. The weaving of all of the previously mentioned, with quantum physics, was so well done that I never lost track of the story line and it was so easy to make the connections in the book to our real world. I liked that it made me think about my own existence and belief system. I really like the Harmony poems describing the harmonies and the quotes that were highlighted throughout the book and then the way they were broken down by chapter at the end of the book.

I would advise to look for extra un-needed words in some places and a needed word or two in other places. The only other thing that I would have done would be put the description of the different Gripps at the beginning of the book instead of at the end of the book. Other than that, this is a beautifully written book, one that I think many people would enjoy for it’s unique vision of the world and it’s subtle yet profound commentary on society.