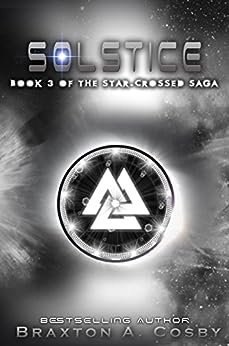 An otherworldly adventure awaits readers in the pages of Solstice by Braxton A. Cosby. The third book in a series starts off with a bang as readers are introduced, or reintroduced, to our protagonists Sydney and William. Theirs is a story for the ages as they defy distance and fate to be together. This epic saga will take readers on a journey through the stars and intertwine between lives and destinies. Come along as we watch our protagonists face their fears, develop who they are and take on what could be seen as an impossible undertaking. They aren’t alone and their friends will be there to help and support them every step of the way.

For those who are new to the series, the first few chapters might seem a little overwhelming. It’s clear that some major world-building was established in previous installments in the saga. There are some circumstances and terminology that readers will feel goes over their heads when they first bite into it. Not only does the story take place in outer space for a large portion, there are legends and transformations at hand that require a solid understanding about what has happened, in order to understand what will occur. The story is engaging and invites young readers to see themselves in the characters. We all go through some sort of metamorphosis as we develop into our adult selves. The transformation that Sydney undergoes could be likened to that. It’s just a bit confusing for new readers to understand the impact of previous events without reading about them.

If there has to be something to nitpick then perhaps the grammatical and stylistic errors that pop up ever so briefly would be the culprits. They aren’t startling enough to detract from the story, but a few rereads might be needed to make sense of what the sentence is supposed to say.

Cosby knows his craft and he knows his audience. It’s clear that he wrote this book for young adults as the language is easy and comfortable to read. The teens speak like real teenagers and ask the questions while speaking the frustrations that most teenagers might be too afraid to voice. It’s comforting to be able to read a book targeted to your age group and actually be able to identify with it. The fact that Cosby can share a point of view from the perspective of a young woman with just as much ease as sharing one form the view of a young man shows that he is dedicated to telling the best story that he can.

The space-odyssey of Solstice by Braxton A. Cosby is not a book to miss. It’s engaging and well written that readers of all ages will enjoy it. Young adults will get the most out of this book as they identify with the trials and tribulations our protagonists find themselves going through. While it might be confusing for new readers who have picked up this third book in the Star-Crossed Saga to understand what’s happening in the beginning, if you’re patient and devote your energy to this book, you will not be disappointed.