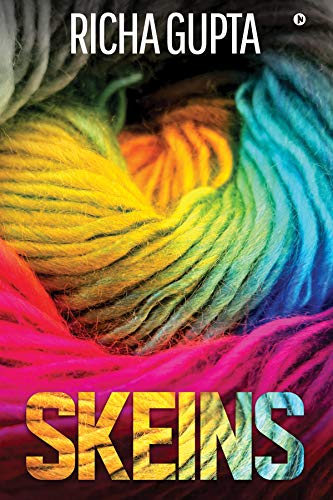 Skeins by Richa Gupta is the story of a large group of globe-trotting Indian women who take a trip to see the sights in Spain and Portugal. The women are similar in heritage, but vary widely in age and experience. Even though they are from the same general area, they also differ in culture and socio-economic status. As the women grow closer, they let each other into their personal lives. They confide in each other and share secrets, regrets, hopes, and dreams. However, it’s not one big happy slumber party. Some of the women find some serious trouble along their journey.

Overall, Skeins was a pretty easy read. The grammar and sentence structure is impeccable. I didn’t find any errors at all. If anything, there were only a few turns of phrase that only suggested that the author’s roots were different than my own. That’s not a bad thing.

If I have any complaint, it’s that the cast of characters was very large. I found it hard, at times, to keep the names of characters and their story lines straight. There seemed to be so much going on at once between all of the background stories.

I enjoyed the diversity of the characters. I especially enjoyed the diversity paired with the camaraderie that the women enjoyed. They came from all walks of life, different social classes, and different customs to form one big, instant family. They seemed to get along very well. They will make readers hope for these kinds of quickly formed but long lasting friendships.

Readers will also identify with the problems that the women face. They discuss the not-so-perfect aspects of their lives without giving the story too heavy of a feel. The story doesn’t bog down or get lost in their troubles. They simply state what’s going on in their lives, but characters don’t seem to dwell too much for the most part. For a story that deals with adultery, a crime ring, decades old grudges, etc., it is a decidedly uplifting tale. The women tackle their problems instead of becoming victims of circumstance.

I liked that Gupta showed the women as strong, powerful, and independent. None of them were “just a wife” or “just a mother.” None of them were leaning too hard on anyone but themselves. In a country where women aren’t generally in hierarchical positions, it was refreshing to see these women being so self-sufficient. Still, they walked the line between traditional arranged marriages and living their dreams, while sometimes doing both with one foot in each world. They seek out independence, their wildest dreams, and love all at once.

The book feels light-hearted in nature. I enjoyed that combination woven with real-life issues. I enjoyed the cultural journey following the women from India touring the Iberian Peninsula. The characters felt real. I’d love to see one of the characters step forward to star in a sequel.