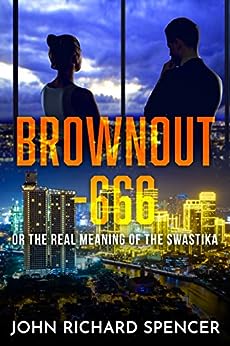 Rick Daly is in the midst of multiple battles–the least of which is the struggle to finally find a way to be happy, settled, and live a normal life. Working and trying to establish a business of his own in the Philippines, Rick Daly meets and unwittingly falls head over heels in love with the young woman he hires to be his secretary and sidekick. When he realizes he loves Marilyn and wants to change his wild ways, he finds that his past is looming closely and threatens his relationship as it tests his loyalty to Marilyn and their, now uncertain, future.

John Spencer, author of Brownout, is clearly a fan of world history. His novel featuring Rick Daly is woven intricately in and out of historical truths. In addition, Spencer even tackles the controversial issue of the Holocaust and the doubt surrounding its existence. Spencer covers a broad range of events and drops his characters and their various subplots strategically into these events from the book’s beginning to its surprising finale.

Brownout incorporates numerous storylines which are, at times, difficult to follow. The bulk of the novel is based on Rick Daly’s life in the Philippines and his relationship with Marilyn, a woman who strives to remain true to herself and her beliefs but sends Rick many a mixed message during the course of their relationship. Spencer’s writing relies heavily on the reader’s penchant for sexual situations as these scenes are prevalent throughout the book, giving the overall book as much the feel of a romance novel as a work of historical fiction.

I feel it’s worth mentioning that the intimate aspect of the relationship portrayed between Rick and Marilyn is complicated at best. As much as Marilyn maintains that she will remain a virgin until she is married, she feels torn between keeping her word and satisfying Rick. I was quite taken aback at Rick taking advantage of Marilyn and violating her trust.

The parallel storyline involving Chris, Rick’s uncle, and his children is a tragic one and is more engaging and engrossing than Rick’s plot. I found that my attention was held much more readily while reading of Chris’s heart-wrenching loss and the immense struggle he faces with each of his children. As I read, I continued to anticipate that Chris would be a more prominent part of the book’s overarching plot and was disappointed that his family’s drama was not more fully explored.

While Brownout is exceptionally well-written, I felt that the subplots were somewhat disjointed. Each of Rick’s subsequent and fleeting relationships added depth to the story but simultaneously added an air of confusion. While all of Spencer’s characters are rich and well-developed, the connections between them seem lacking. The historical accuracies are spot-on and related via Spencer’s characters in a way that makes them conversational and engaging. Readers who appreciate historical fiction and seek an element of romance will find Brownout to their liking.