← Pathway to Prosperity
The Ranatanland Tales →

THE IMMORTAL: A Novel of the Breedline series 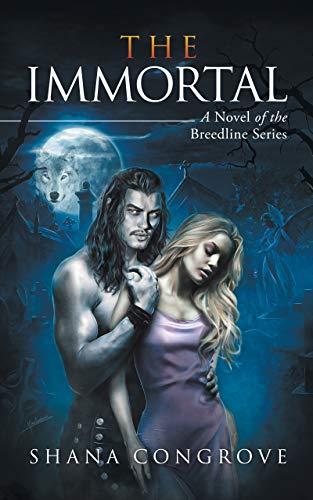 The Immortal is a part of the Breedline series which follows protagonist Jena McCain as she discovers a hidden world full of magic and monsters that puts her in a situation where she must resist dark urges and accept the strange hidden world that becomes uncovered to survive.

Artist Jena McCain is attacked by an ancient creature that has been dormant underground for years. After the attack, she is afflicted by a disease that makes her crave human blood, and she has to resist the urges brought on by the disease for one hundred and one days. If not, she will transform into the monster that attacked her. In desperate need of help, her best friend, Angie, then introduces her to a world that is beyond anything that Jena expected. It is revealed that Angie can transform into a wolf and there are an entire species of supernatural creatures called Breedline.

Author Shana Congrove has created a standout novel in the saturated paranormal romance genre. The Immortal unique possess a unique and compelling lore that serves the plot well and ensures that drama is around ever corner. I enjoyed the alluring relationships between the characters, as it seems that everyone has secrets. Particularly, I loved the idea that friends, even our closest friends, keep these big secrets from us, and the friendship felt very genuine. Additionally, I like the resistance to just buy into all of these crazy circumstances that Jena is witnessing. In too many books, I’ve seen the main character accept the world for what it was and dived right into the journey. Jena’s reaction to it all gives the book feel more authentic and relatable.

The Immortal follows Jena on a race against time that keeps the story relentlessly moving forward ensuring the suspense is high and the desperation is palpable. This is a thrilling shifter romance novel that surprised me with its deep lore and methodical character development. This book will appeal to any fan of paranormal romance that wants to read an urban fantasy story that is grounded but still dramatic.

← Pathway to Prosperity
The Ranatanland Tales →