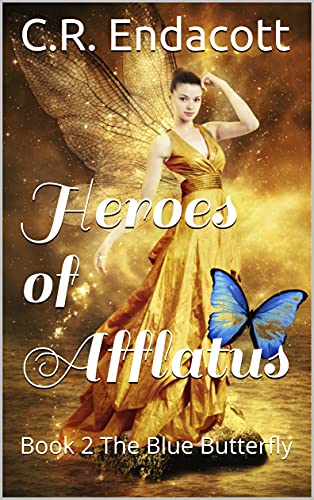 First, they have to find the entrance to the Faerie World. Unfortunately, things take a terrible turn when Avery is kidnapped by Depravity’s stone minions. In a race against time, Jared, Garon, and Carson, with the help of unlikely allies, must rescue Avery before she’s drained of all her magic and stop Depravity.

The Blue Butterfly is the second entry in C.R Endacott’s Heroes of Afflatus Series. The series centers on a group of regular teenagers who find their way into a magical realm where they become heroes by taking on daring missions.

With fantasy at its core, Endacott’s book is imaginative. But thankfully, the author understands that fantasy doesn’t have to be complicated to be thrilling. Instead, the author delights with simple and well-defined otherworldly elements and characters while relying on the strength of the plot to keep readers engaged.

The prose is also compelling. With a mix of characters brimming with personality, high stakes, and resonating themes, Endacott gets you to believe in his story.

I also enjoyed symbolisms like the depiction of Depravity as the villain and how Endacott argues that Depravity is found in the choices we make. The world’s evil is not conjured by some intangible entity but by man’s choices. Likewise, the existing good stems from our decisions.

Treat me to a delightfully pulsating ending and you’ve won yourself a fan. Safe to say, Endacott’s won a new cheerleader. But even with pom poms in hand, I’ll confess that I had a few head-scratching moments where characters inexplicably acted ignorant about story elements they previously interacted with. I’m still a fan of the fresh and fluid writing though.

The Blue Butterfly is an exciting coming of age adventure story that excellently takes this fantasy story to the next level. I hope the next part in the Heroes of Afflatus series is just as good or even better.

1A Penn Road is a short, suspense thriller about obsession fuelled by desire. Man’s desire is the desire of the other, but be careful who you let in.

Chrissy is young, vibrant and generous. However, she is prone to outbursts of rage and depression, triggered by an obsession with her ex-boyfriend Leon.

The lack of recognition from whom she most desires it, has led Chrissy to develop reckless and self-serving tendencies, which continue to escalate tensions at 1A Penn Road. Until one Thursday evening, she is found bleeding to death on the staircase.

1A Penn Road is a short, sharp gripping thriller. It is one of the books in a series written by the same author. The stories require only an hour of your time to read, but in that hour you will be drawn in by the suspense and kept guessing until the last few pages.

The next book in the series will be the title Jay Deux.