Those Dreams Devastate Me

Blood Mark follows a woman who realizes that her nightmares our actually visions of real people being killed and her birthmarks are the only thing protecting her from the killer. What was the inspiration for the setup to your story?

The inspiration for the set up of Blood Mark comes from dreams, the ones that seem far too real. The ones where, when you wake up—sometimes in a sweat—you experience a brief moment in which you wonder if what just happened was a dream or reality. I’ve had vivid dreams all my life, including some pretty bad nightmares when I was young. The worst dreams are the ones wherein someone I love is killed, or hurt, or leaves me – those dreams devastate me.

Jane Walker is an intriguing and well developed character. What were some driving ideals behind your character’s development?

There’s always a danger of making a character too perfect, too rich, too beautiful—it makes them unrelatable, which doesn’t work well in books like mine that are set in contemporary times, where the character is living amongst us. In developing Jane Walker, I wanted someone with flaws. As such, Jane has personality traits that make her difficult to live with. She also makes poor choices at times, which we all do, and she has to live with the consequences. It was also important that I made her both strong and vulnerable. Wrapping Jane in the blood mark served both of those ends. And finally, I wanted her to know what it felt like to have nothing—no family, no money, no beauty—so she would appreciate the friends who came into her life, complete with their flaws.

I really wanted to explore the concept of what is beauty—a theme as old as time. I find it especially interesting in light of tattoos being so popular today; the designs people choose, and where they choose to display them are often topics of judgment. Instead of having a choice in the matter, I thought I’d explore what it might feel like to live with an unflattering birthmark that’s difficult to hide.

I also wanted to explore how beauty plays into assumptions of good vs evil. Our society often puts unearned labels on people because of their perceived attractiveness, wealth, or clothing. But these things are all facades, like the recessed ceiling in the bar Jane frequents, painted black to hide the pipes, wires, and ducting. Jane sees this as “Proof that even the sleekest facade had something ugly to hide.”

I’ve also explored the role of family in the story. Jane and Sadie didn’t have the benefit of a stable, loving home, but developed a keen sense of family, honour, and justice. Rick, who had the benefit of a loving, well-off family, turned out to have a warped sense of justice and to love himself more than anyone else.

And I’ve also played around with the concepts of strength and vulnerability, exploring both from the physical and psychological perspectives. I love that sometimes it’s the person who’s weakest physically, that’s the strongest psychologically. And if the game is psychological, well, sometimes the weakling wins!

I’m working on a sequel to Blood Mark, possibly two. Though Blood Mark is a stand-alone book, it contains some intriguing storylines that are ripe for exploring. What became of Jane’s friend, Buddy? for example. And where is Maria’s Inca offering bowl? I’d hate to think what might happen if it got into the wrong hands. Does Jane’s roommate, Sadie stay the course she set for herself? How does the court case against Rick and Andrew turn out? I’m excited to see where these possibilities take me. I expect the first sequel to come out late next year. 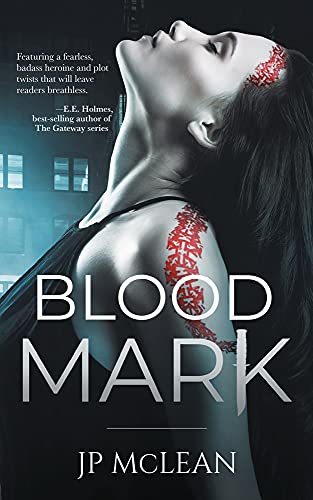 Blood Mark, by J.P. McLean, is set in Vancouver and tells the story of Jane Walker who was abandoned at birth and thrown into the system after a series of tragedies. She meets Sadie, a troubled teen who sticks with her as they make their way in life. Jane’s past is mysterious and this mystery is driven by what she believes are red birthmarks snaking around her body. Jane would do anything to get rid of these unsightly marks and has a stable job at a garden center to earn the money to have them removed. Sadie, who lives with Jane, works as a waitress while still caught up with the seedier side of Vancouver. We learn that Jane also suffers from vivid dreams where, while in a deep sleep, she visits people known to her in the past and sees things happening – often terrible and frightening events. Jane meets Ethan and things start to change when her birthmarks start disappearing and her dreams take a disturbing and deadly turn.

Blood Mark is an action packed thriller and Jane’s character reminded me of Lisbeth from The Girl Who Kicked the Hornets’ Nest. All the characters are gritty and flawed, which I enjoyed because they all felt authentic.

This story has one of the most unique twists to the crime fiction genre I’ve seen this year. Is it a crime thriller or a paranormal romance novel? It is a fantastic blend of both. This is pulled off by the meticulous writing of JP McLean, who has created a detailed backstory to both the protagonists and the world, making them both captivating and alluring.

The story flowed well and the plot developments were easy to follow. This is key to ensuring readers know exactly what is happening in a novel that has wild twists and terrifying nightmares that bleed into reality.

Blood Mark is an enthralling dark fantasy novel with captivating characters that will appeal to anyone looking for a crime thriller with a unique supernatural setup.