Midwife of Normandy follows young Clare as she struggles to save her family and career from France’s tyrannical king. What was the inspiration for the setup to this thrilling novel?

An avid fan of history, I researched 17th century religious persecution of Huguenots by King Louis XIV and was surprised how few historical fiction novels had been set during this turbulent period (as opposed to numerous novels set in other times, like Tudor England.) I also noted that many historical fiction authors focused on women of royal or aristocratic blood as protagonists.

I wanted to do something different, so I created a Huguenot female protagonist, who rises from humble beginnings and dares to defy and outwit male authority, including the King’s soldiers.

After visiting Rouen and the beautiful countryside of Normandy, I felt certain this was the perfect location for my book.

I didn’t think being a midwife could be so interesting and this novel definitely caused me to look more into the profession. Why did you choose this profession for Clare in the story?

Let’s face facts; there weren’t many professional options available to 17th century women. It was widely held that their only proper role was marriage, absolute obedience to husbands, and bearing of children. Midwifery was almost exclusively performed by females, but was looked upon as a lowly trade.

In order to rise above her humble beginnings, Clare decides to offer her services, using a secret ancestral formula for pain-free birth, exclusively to wealthy members of the aristocracy who reward her handsomely, thereby turning midwifery into a lucrative profession.

Clare is a fascinating character that continued to develop as the story progressed. What were some themes you wanted to capture in Clare’s character?

Throughout history, women have struggled against many prejudices. What I set out to achieve was to create a strong, ambitious young woman who sought to control her own destiny. In a sense, Clare was an early pioneer for female equality in 17th century France, as she sought a career. However, she knew she was also obligated to marry in order to bear a female child to carry on her ancestral midwifery heritage.

At first, dewy-eyed young Clare is disappointed when her romantic childhood sweetheart leaves the country and she is coerced into marrying his older, dull brother. However, she turns out to be much stronger than her husband, even to the point of secretly using birth control until she decides the time is right for bearing children. And she is the one who must bravely plot their escape from France.

Another minor theme is the conflict a career woman faces between spending time with her children and working outside the home. A feeling of guilt. This balancing act continues through the present day, so it is a universal, contemporary theme.

The second novel in the series, Lucina’s Destiny, is now available on Amazon.com. It follows the exciting adventures of Clare and her family as they settle in England. 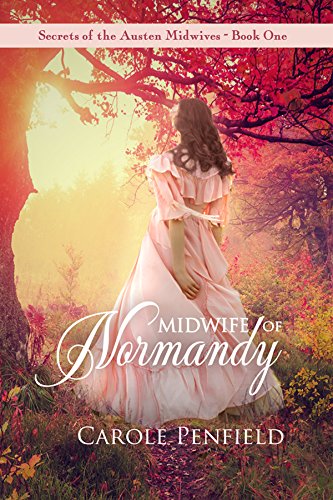 On the brink of womanhood, she records in her journal the grand plan for her perfect life–marriage to the man she loves, renovation of mysterious Maison Dupres as her home, and a rewarding profession. The key to her plan lies in “the magic elixir,” her ancestors’ secret formula for pain-free childbirth, which she offers solely to wealthy aristocratic women.

But King Louis’ increasing pressure on Huguenots to convert to Catholicism shatters Clare’s dreams. Her lover forced to flee France, she is compelled to marry his boring brother. Then she is banned from practicing midwifery. Yearning to continue her profession coupled with fear that her children will be kidnapped by Papists, Clare tries to convince her stubborn husband to move to England, but he is blind to the growing menace. When danger lurks in the form of the King’s dreaded Dragonnade soldiers, she must summon all her strength and determination to save her family.

Can Clare succeed in getting her family safely out of France before it is too late?

Carole Penfield gives readers a realistic and interesting piece of historical fiction in The Midwife of Normandy. The story opens with Clare, who finds herself in the cargo hold of a ship along with her family. It is the late 1600’s and they are sneaking out of France to England, where Protestants are not persecuted, and she can continue her midwifery practice. We have no idea what preceded her current state of affairs until we are transported back to her youth and the very first day she received her journal. We learn about Clare’s upbringing and the strong tradition of midwifery in her family, along with the history of disapproving husbands. It is not long before Clare herself is ready for training and eventually ready to take over the practice. It is also not long before she acquires a disapproving husband of her own.

Penfield creates a beautiful and flowing story with elements of history, romance, and story-telling brought together by a colorful cast of characters. Clare is a strong female lead, dealing with issues that are timeless. I love that her family has such a passion for helping other women and will stop at nothing to do so. The history behind this story is interesting and lead me to further research, which is one thing I really love about pieces of historical fiction. I thought the author could have included more realistic dialogue to the times, but I understand that just wasn’t the direction she went with this piece.

Her characters are fantastic and add richness to the story, as all good characters do. There are characters with a dark side and those who even it out with some comedy and levity. Penfield is a self-proclaimed lover of Jane Austen and weaves elements of that authors works into her story. She challenges other Austen fans to find little hidden tidbits throughout the story that are Austen-inspired.

The juxtaposition of a personal story of feminine struggle for power and equality with the story of a religious group struggling with the same issue is an interesting one. These are themes that have manifested throughout history and continue to be real struggles so I thought this book felt modern despite its historical setting.

Penfield did a beautiful job with this story. I was entertained and interested throughout and even learned new history! I look forward to reading more books in this series!