It’s Prime For A Serial Killer

Requiem follows a unique team from the U.S. Marshal department as they hunt a serial killer using some unconventional methods. What was the inspiration for the setup to your story?

First, the setting is urban, maquiladora, twin manufacturing plants or twin fruit/vegetable plants. I know this area of Reynosa and McAllen, TX very well. I built three industrial plants in three years with twin plants in Reynosa and in Hidalgo County, across the River. I know the worker schedules and hardships. There are multinational plant managers in Reynosa which often do not take into consideration local worker culture. At the same time, the manufacturing plants for automotive parts and scientific instruments must maintain international quality control procedures. It’s prime for a serial killer.

Did you create an outline for the characters in the story before you started writing or did the characters personalities grow organically as you were writing?

The story flows organically from the land of the border and the characters that live there. Most of the inhabitants of the RGV (Rio Grande Valley) and their families have lived there long before Americans invaded this area a little over a hundred years ago. For a better understanding of the borders, recall the hyper-aggressive American forces that took this area by force without reparations. It’s helpful in understanding the real problem with immigration. Within the last fifty years, recall the United States manipulation of the governments of all of Central America and Mexico, and the internal chaos that ensued. These tactics caused social and political unrest, in Central America and Haiti especially, pushing those citizens to flee. Because of our manipulative foreign policies, we need to better understand the sea of humanity surging to the border and understand that, as Americans, we are morally obligated to help the immigrants who have suffered due to our foreign policies.

Did you do a lot of research to maintain the accuracy of the Native American shaman practices?

No, I know a number of Native Americans.

What can you tell readers about book three in the series and when will it be available?

Hallelujah is available now on Amazon. Requiem will release June 21 and Reservoir will follow on July 26. All can be found on Amazon.com.

Requiem is BJ Taylor’s riveting continuation of The Borderland Mysteries, a fantastic crime fiction series portrayed in a unique format. Suspicious activity is occurring yet again around the territorial border. It’s up to U.S. Federal Marshal Gabriella Zamora and her team to investigate and uncover the mystery, protecting the civilians with value and honor.

A series of murders have been recorded: young Mexican women are being viciously murdered by a possible serial killer creeping into the area of the maquiladoras near the border. The industry of the maquiladoras is very important to the U.S.’s economy, bringing a new dimension to the problem at hand. Again, the team is involved in the investigation of a crime that could have relevant political and economical implications. This time the crime seems riskier and poses a real danger to the team: will they find out the truth behind everything without suffering any damage?

One of the most intriguing elements of this book is Gabriella Zamora’s team. They are diverse and unique, each of them bringing something new and different to this enthralling story, thus turning it into a very dynamic and gripping narrative. Through this series, the attachment to the characters continues to grow progressively, showing true potential for future books. The plot presented is a little more complex than in the first book as the crimes become more serious. However, the characters’ charm makes the whole plot an adventure worth following.

There is tension and a true sense of mystery that keeps the reader captivated at all times, flying through every page. This is not your typical mystery series though, there are creative elements in the story that make it stand out from the conventional books of this genre. One of these elements is the connection with spirituality that some of the characters have, each of them remaining faithful to their culture and illustrating in a beautiful manner the spiritual aspect of peoples’ lives on the border. The author has portrayed these spiritual beliefs in a respectful and beautiful manner.

Requiem is a suspenseful mystery novel that will draw readers in from the start. Diversity, culture, family, and strange enigmas are key elements in this stunning book. This is a thrilling crime adventure with a compelling plot that deals with friendship and morals; perfectly balancing the good and the bad of humanity. 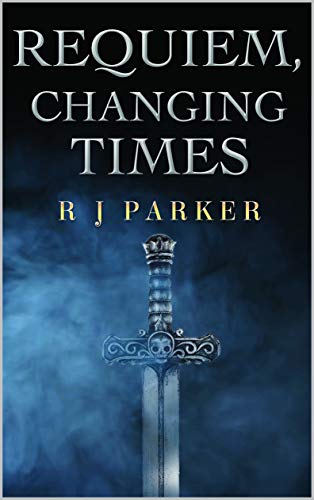 Banks and O’Neil are on a mission, and they have a defined target: Clint Holden. Obtaining access to one Clint Holden will not be the easiest of tasks, though. Making their way from their own world to Clint’s is the first obstacle. Finding him among the masses of country folk is their second. Standing, unknowingly, in their way is Jason Cooper, a washed-up police officer still biding his time on the force. Banks and O’Neil face some interesting obstacles as they search for Clint Holden and seek to accomplish their mission. If they can get past Cooper, finding Clint will be a breeze, or will it?

Requiem, Changing Times, by R.J. Parker, is an adventure of otherworldly proportions. Peppered with humor, steeped in suspense, and filled with everything fantasy fans seek, Parker’s novel delivers it all.

I enjoy humor in any fiction book I read. Some plots call for it more than others. Parker understands this better than anyone. Throughout this unique plot alternately set on Earth and beyond, Parker manages quite well to give lighthearted lines to his cast of characters. Their exchanges are welcome breaks to some of the more intensely focused exchanges.

One aspect of the book that did tend to interfere with the flow was the introduction of accents by some of the characters. Rather thick and intricate accents permeate much of the reading and require some rescanning of text to fully grasp the character’s intent. While I am all for accents and a true-to-life feel, these accents seemed to halt the flow somewhat.

Parker introduces Clint and Corbin as relatable characters readers will appreciate and find likable. Watching the entire adventure unfold with school-age boys as the key protagonists makes the story all the more relatable. Readers who want the feel of the adventure stories from their youth will find Requiem, Changing Times right up their alley. Complete with school drama and a teacher every reader will love to hate, Parker’s novel sets up a fantastic background for the two main characters, Clint and Corbin.

I highly recommend Requiem, Changing Times to any reader seeking a new science fiction fantasy. Those of us intrigued with stories of the extraterrestrial will find Clint and Corbin’s adventure a fast-paced quick read for its length. Memorable characters and a unique set of circumstances involving the two young boys make Requiem, Changing Times a must-read.

Gelo Fleisher, author of Shadowcursed, talks writing and indie game development all while working as a Certified Public Accountant. Kind of like Batman and Bruce Wayne… except he does your taxes afterward.

Is Shadowcursed the beginning of a series. What can readers expect from the rest of the series after Shadowcursed?
Sadly Shadowcursed is not the beginning of a series, but is rather a stand-alone story. Right now I’m not planning on writing another book in the Shadowcursed universe unless there’s a huge clamor for it (and I can think up of a good plot for a sequel). That being said, there is something of a semi-sequel in the works for the video game half of Shadowcursed. I’m an indie game developer as well as an author, and so after I wrote Shadowcursed, I built a free companion computer game titled ‘Requiem’ to go along with it. At the moment I’m about half way through a sequel to ‘Requiem’; here’s a screenshot of how it’s shaping up. I’m still very busy writing though and I’m currently about 20K words into my next novel, which will be a sci-fi detective mystery. Though each of my stories tend to be very different from the other, I think if people enjoyed Shadowcursed, they’ll enjoy this one too.

Bolen’s rooftop antics were obviously inspired by games like Thief, but what was your inspiration for the character of Bolen and the city he lives in?
Yes, the Thief series of video games were by far the largest inspiration. The original titles in the Thief series, back in the late 1990’s, had these gorgeous painted cut scenes. I was always struck by the somber beauty of their art, and the visual feel and timbre of Shadowcursed is an homage to them. The actual inspiration for the plot and characters came from different sources. The initial story inspiration was the idea of a thief having to destroy something beautiful in order to do his job. The main character, Bolen, grew out of this idea – that of a thief at the end of his career, doing one last heist that forces him to commit what ends up being a terrible crime, and makes him to reflect on his life and choices.

Shadowcursed is part of a fan mission you created for the game Thief called Requiem. How do these two mediums fit together for the overall story?
Plot wise, Shadowcursed and Requiem are very different. They both star Bolen and other characters from Shadowcursed, and they take place in similar settings, but they tell totally different stories. You can sort of consider them as being in parallel universes. What they do have in common are the same visual feel (being both inspired by the same source material) and narrative themes, regarding the fixing of past wrongs and the uncovering of a long buried evil. Because one (Shadowcursed) is a book, and the other (Requiem) is a computer game, they use very different narrative devices to tell their stories, but if someone wants to actually step into the shoes of Bolen, and navigate their way around a fantastical medieval setting (instead of just reading about it), then I think they’d enjoy Requiem. And best of all, it’s completely free.

You recently won Square-Enix’s Thief level design contest for Requiem, the companion fan mission to Shadowcursed. How does a Certified Public Accountant become a video game creator and writer?
Lots of late nights and a very supportive wife :-). I think a lot of people start out with dreams of pursuing a creative path (whether it’s writing, or art, or music, or game design) but soon find all their energy being sucked out of them by their day job. To counteract this, it’s important to surround yourself with people who you can interact with to keep your creative passions alive. For me it’s my family, my church, and a writing group that I’m part of. And of course you need to put in the hard work to actually get good at your passion, even if that means sacrificing some of your free time. But if you can do it, you can look back in a few years and realize that you’ve actually created something and shared it with the world, and that’s a great feeling.