The Friendship Between Man and Dragon

The Roar of a Dragon follows a soldier who discovers a far future ruled by an ancient evil and grapples with the choice to save the past that exiled him. What was the inspiration for the setup to your story?

From conception to completion, this book took ten years to formulate and write. The movie Dragonheart was a major inspiration. I loved the idea of exploring the friendship between man and dragon. What I mainly struggled with in coming up with a story for the book was the antagonist. Once I came up with Sirak and the Ther-lor, the story really started to come together. As far as Aidan goes, I love a dark, brooding protagonist–a character that begins with a more happy, conventional backstory, and then something major and traumatizing happens and then they’re a completely different, darker character. I love things like that.

Aidan is an intriguing and well developed character. What were some driving ideals behind his character’s development?

Aidan always dreamed of being a knight. In the first half of the book, he believes strongly in the ideas of honor and sacrifice, and all the other things you would expect a knight to believe in. In the second half of the book, Aidan is much more bitter and believes he’s been betrayed. Deep down, he still believes in all the ideals of a knight, but now all these other emotions are pulling him in different directions. As with most main characters, I think most authors put a lot of themselves into them, and that’s certainly true here.

Friendship was first and foremost. As I said earlier, Dragonheart was a major inspiration for this book–I loved the relationship between Bowen and Draco in that movie. I really wanted Aidan and Iskandor to have that same kind of relationship. The friendship theme is also explored in the relationship between Aidan and Derrick. They have a very different dynamic, but the same type of bond. Betrayal is another theme, of course. I think it’s fascinating how different people can deal with things like that. Closer to the end of the book, the theme is love is explored, and it goes more in depth in The Treachery of a Weasel and The Cry of a Raven.

With The Roar of a Dragon series done (and there will be more in that world to come, so stay tuned!), my main goal is to finish the zombie apocalypse book that I’m currently working on. I made characters for my two boys in it, so it’s very important for me to finish it. The tentative title of the book is All We Have Left, though that’s likely to change since there’s already a well-known book by that name. As to when it will be available, I’m shooting for the end of 2021, maybe early 2022.

The Roar of a Dragon 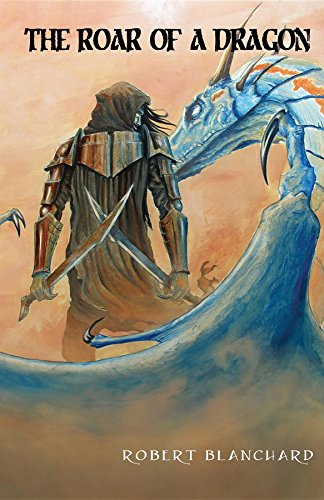 The Roar of a Dragon by Robert Blanchard is an adventurous fantasy narrated by Aidan, who begins the story from his childhood and humble beginnings in the countryside. The story develops from Aidan’s growing up on a farm and learning about the necessities of life. He details his family life and precisely how his upbringing prepares him for an initially traditional life, then unexpectedly changes. Aidan quickly discovers that the life he was raised for, and his destiny, is far more than he could imagine.

A simple twist in events, and realization by Aidan, propels him into a different life. He constantly struggles with dreams of his mother and a past and future that he learns to accept. The challenges of Aidan’s coming of age and developing into a solid and noble role are well-written with deep compassion and ambition.

As Aidan struggles with his fate and many obstacles ahead, he also grapples with his emotions and struggles to fulfill his soldier training. The book is more than a fantasy as it’s a deeply personal account of a young man’s transition from a naïve farmer’s son to someone who can make a difference in battle and beyond.

The characters are well woven into the story, shaping Aidan’s life and development into a bigger world that’s dangerous and exciting. It quickly becomes increasingly clear that Aidan’s life will play a significant role in a conquest that will require him to prove himself. The story beautifully explores Aidan’s life and his inner thoughts during his growth. He narrates every stage of his journey with exceptional clarity, with just enough detail and flavor to continuously engage the reader.

The Roar of the Dragon is a fantastic story of adventure and fighting battles, both literal and personal, with a rich character layer and development. Each scene is well described to paint authentic, rustic landscapes in a surreal fantasy world that comes to life. Aidan’s life is full of vibrant action that keeps the pages turning once you begin reading. He faces both external forces, from dragons and war, and his internal conflict.

The book is an incredible read, and you’ll easily move through the story quickly with anticipation for the subsequent development. The Roar of the Dragon is entertaining and well structured, detailing Aidan’s ability to face and conquer various levels of conflict in a unique fantasy world.