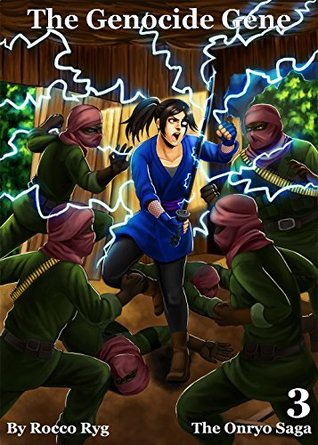 The Genocide Gene is the third book in the thrilling Onryo Saga and continues the adventures of the teenage superheroes in their fight to save humanity. Chikara, Renka and Gen are the superhero trio with mystical powers that they inherited from a ring with a mysterious black rock. The trio is on a crime fighting spree when Chikara receives a message from her late mother that takes the superheroes on an adventure to Sierra Leone. Meanwhile, a team of brothers are planning to eradicate tribes in a deadly attack and soon enough the teenagers are caught up in a whirlwind of African supremacists, terrorists and evil politicians. Friendships and alliances will be put to the test as they battle their way through a storm of evil extremists. Will their friendships survive this heroic escapade or will it finally be the end of the Japanese crime fighters?

The Genocide Gene, written by Rocco Ryg, is the third edition of the Onryo Saga and as always he delivers an exceptional story line packed with action and charm. The story begins back in 1985, with a cover-up involving a mysterious black stone which gives people ungodly powers. This powerful stone forges the path to a catastrophe that will echo its effects in years to come.

It then flashes forward to the year 2012 where everyone’s favourite Japanese super heroes have banded together with their mystical powers to clean up the streets of drug crimes, child trafficking and murdering of innocent souls.

Like a voice beyond the grave, Chikara is contacted with a message left by her late mother where she requests that Chikara, Renka and Gen venture to the deep throes of Africa. Friendships will be tested and lines crossed as you delve deeper into the twisted underground world of Sierra Leone, forcing the reader to confront terrorists, gangsters and teenagers with magical abilities. You will reminisce with old friends and be left with a bitter taste as they dance with old enemies and form unlikely alliances in a bid to do what they do best- saving lives.

Prepare to be on the edge of your seat as you follow extremists on the hunt for those who can heal, and feel the terror as enemies are enveloped with an evil presence. My favourite part of Rocco Ryg’s novels is that he is able to intricately weave multiple story lines together in such a way that the reader will be engrossed from start to finish. I love seeing how the characters grow and how they challenge themselves in situations using their individual powers. The Genocide Gene also explores a rich diversity of cultural differences and gives you a taste of gangster life across different nations.

Staying true to the themes of action crossed with a dash of politics and mystical powers, The Genocide Gene will be sure to satisfy your need for a superhero tale. I would recommend this for all who are in need of an adventure. Will they be successful in Chikaras mission from the grave or have the superheroes finally met their match?