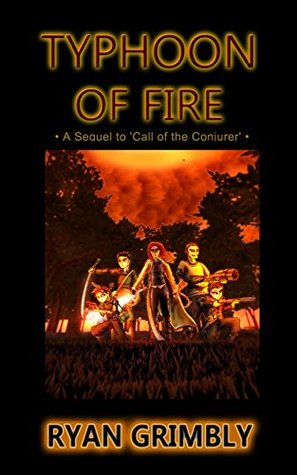 Typhoon by Fire by Ryan Grimbly is a fun read! We follow Ace Mcdagger, who teams up with Captain Loxwell of November squad, to rescue her teammates who are scattered in the forests of Malaysia. Three years after basic training  in combat and the use of magic, while studying monsters that roam the world, Ace and his team will be put to the test. A rogue scientist was the quarry of Captain Loxwell and remains at large. The joint effort is faced by many obstacles including psychic anomalies, scientific experiments gone awry, and a storm that threatens to consume the region…the Typhoon of Fire.

Grimbly’s writing is one that ensures good pacing. He gives us a small introduction to Ace and Shimon, two of the main characters, showing their roots of where they came from. The prose reads well and quickly, which for a novel such as this is a plus. The blend of genres is a notable factor considering I feel this fits into a military thriller, paranormal, or even urban fantasy. The book could even count as young adult with the playful elements within, but some of the language may be too intense at times for teens. The fact that this blend seems rather seamless is a good reason for any reader that likes these genres to pick this book up.

The prose is strongest with the interplay of Grimbly’s characters. Ace, Shimon, Tiffany, and Loxwell all have brilliant dialogue with one another and they feel like living characters who come off page. It is one of the reasons why I felt this book was such a pleasure to read in the first place. This along with the action that bristles in the scenes that fill most of the book, makes sure to keep the reader turning the page. The blend of military training, magic, and psychic powers may be off putting for some readers, but I think Grimbly manages to balance all of these genres surprisingly well.

Despite all of this, the book is not without some flaws, which include some of the plot and description. I won’t spoil the plot here, so I can’t say much on that front. I will say that those remarks do not mar the good points of this book. Grimbly does skimp on the description and enough that I  often became lost in some of his scenes. And as a reader there is nothing more disconcerting than realizing that you’ve lost the sense of “space” that a character or characters exist in.

With all of this in mind, the novel is a wild ride that does not let up until the end. The book is part of a series that I may check out in the future as well. I would encourage fans of urban fantasy, paranormal, and military fiction to take a dive into The Typhoon of Fire.