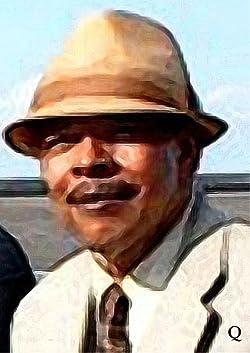 LT: The Voynich Gambit follows Special Police Officer Blalock as he is put to the test when D.C.’s most infamous artifact dealers set their sights on a mysterious treasure. What was your inspiration for this novel and how did it develop as you wrote?

Quintin Peterson: The Folger Shakespeare Library was the inspiration for The Voynich Gambit, like its prequel, Guarding Shakespeare. I worked there as a special police officer with its Department of Safety and Security following my retirement from the Metropolitan Police Department of Washington, DC on April 23, 2010. (http://tinyurl.com/jppths4)

LT: The novel is set in modern day D.C., where you describe polished skyscrapers, historic landmarks, and endless traffic. Why did you choose this as the setting for you book?

Quintin Peterson: I wanted to write a noir mystery thriller using the Folger Shakespeare Library as the backdrop. The Folger Library is located in my hometown, Washington, DC. (http://www.folger.edu/)

LT: Lieutenant Norman Blalock works at the Folger Shakespeare Library as a security guard protecting its treasures for over two decades. What themes did you want to capture as you developed Norman’s character throughout the novel?

LT: What is the next book that you are working on and when will it be available?

Quintin Peterson: Right now I am working on the second installment of my Private Eye Luther Kane Series, The Last Goodbye. Afterward, I will working on The Shakespeare Redemption. Like all of my books, The Last Goodbye will be available at Amazon, Barnes & Noble, Books-A-Million, Indie Bound, et al. 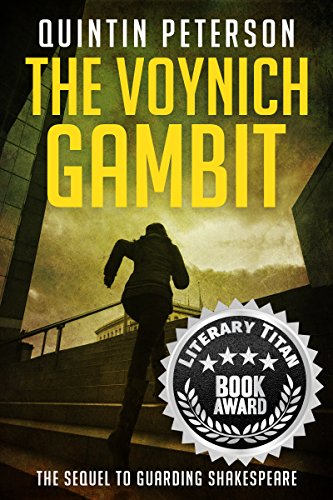 Special Police Officer Lt. Norman Blalock, who has been guarding the treasures of the Folger Shakespeare Library for 25 years, has been coerced into a plot to heist from the Folger Museum “the most mysterious book in the world,” the Voynich Manuscript, on loan from Yale University. Under threat of suffering the consequences of their involvement in the botched plot to heist another priceless artifact from the Folger underground bank vault several months earlier, Blalock and his partner-in-crime Kavitha Netram are once again under the thumb of nefarious businessman Rupert Whyte, and have no choice but to play along.