← The Odds of Gods
Seven Days in Lebanon → 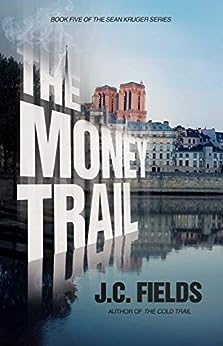 The Money Trail is another excellent edition to and Sean Kruger series. Once again we meet Sean Kruger and his band of intriguing friends. It’s obvious that Fields cares about his characters as the development of core characters that have been present throughout the series is extremely well done. There’s just enough action to get your heart pumping and just enough drama to have you on the edge of your seat.

It takes skill to keep readers coming back again and again to read about the same characters in slightly similar situations. It can get redundant and boring when executed poorly. That is not what readers will find in this book. Lovers of the Sean Kruger Series will only find more of what they’ve come to love and expect out of Fields. His characters are well developed, the action and drama are paced well and the twists and turns will have readers guessing with just the right amount of bait. It’s hard to put down a book in the Kruger series once you’ve picked it up and The Money Trail is no exception.

Fields has been writing these books for nearly five years. That’s a long time to keep characters straight and ensure that you don’t have them acting out of turn. Clearly Fields has a method to his madness as every book further develops the characters personalities and honors their growth from installment to installment. His books have won awards and are sure to influence a generation of readers. High praise for someone who began as an Indie writer making a break on their own.

Reading an installment of the Sean Kruger Series can be bitter-sweet. There is the thrill of the read: finding out what Kruger is up to now, where he will go and who he will bring with him. But there is also the disappointment when it ends because you simply want more. The Money Trail by J.C. Fields brings out that feeling effortlessly. It’s such an engaging read that is engrossing and fun. This book is an excellent installment in the series and I can’t wait for the next thrilling drama he gets caught up in.

← The Odds of Gods
Seven Days in Lebanon →