At War With Chaos 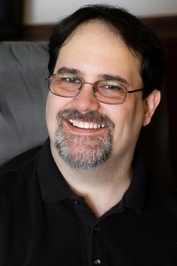 Cleansed follows the life and adventures of a young man as his destiny is unwittingly grafted to a battle among a triumvirate of otherworldly gods. What made you write a story about this topic? Anything pulled from your life experiences?

The story is part of an overall arc revolving around the idea of how the gods, or anyone in high places of power, affect the lives or normal people, and how people can think they know what’s going on, but, in truth, they’ve no idea.

I felt that the characters in this story, especially the main character Dirge, were well developed. What morals and guiding principles did you use to create your characters?

Well, as the world is set in a time where the god of Chaos is in complete control, I felt Dirge’s moral base would be that of the god of Order who is at war with Chaos. I modeled those beliefs generally after the Judea/Christian faiths. Personally, I find them far too harsh, but I felt they fit the setting quite well.

I felt that the story flowed naturally. What was one thing that happened organically in the story that you did not plan, but was happy to find?

I would say Dirge’s constant internal struggle. I’d initially planned on the story to be much shorter and simpler, but as I wrote the various confits became more evident and dynamic. Plus I found out that there was far more to the story than I’d first thought.

Next I’m working on a story that is being released in two volumes and they follow Cleansed. It’s tilted Chaos Reigns. The first is Volume 1: The Hand of God, and the second will be Volume 2: The Tower of Time. The first is nearly complete and I expect it to be our sometime next year. 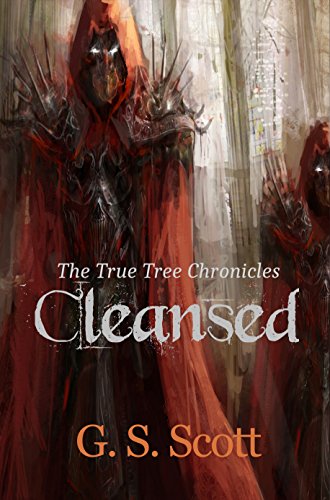 The world is in the grasp of the God of Chaos, whose only mantra is:Do as Thou Wilt.

When Chaos orchestrates the mass slaughter he calls The Cleansing, men and Gods alike turn to stand up against him. With the God of Chaos, the God of Death, and the God of Order clashing, their followers must face off in an epic, bloody struggle.

Dirge, an apprentice to the Brotherhood of Assassins and follower of Death, is approached by The Prophet of the forgotten God of Order. Suddenly, he finds himself at odds with all that he knows and all that will be.

Three Gods. One man – torn between what is right and what is wrong and what he’s destined to do. 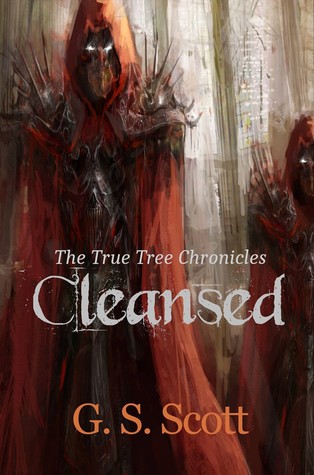 Cleansed by G.S. Scott follows the life and adventures of a young man named Dirge as his destiny is unwittingly grafted to a battle among a triumvirate of otherworldly gods. The fantasy tale, which has a refreshingly contained scope and brisk pace considering the current genre climate, begins with Dirge as a small boy who is loved, if a bit neglected, by his prostitute-with-a-heart-of-gold mother. As street urchins are wont to do, Dirge quickly comes across his call to action in the form of a magical pendant that he finds during an early flight from danger, and thus sets the stage for later conflict. In a series of events that may be a bit on the nose for some readers and exactly right for others, Dirge loses his mother, becomes an orphan, and is immediately adopted into a patriarchal and heraldic order that provides discipline, training, and spiritual sustenance. By the end of the first act of the novel, Scott has positioned Dirge to be the prototypical young warrior – full of both shining promise and untested potential. What follows is a by the numbers rise-fall-redemption story seeing the fated hero forced to choose between serving the god of death or the god of law as they both combat the singularly evil force of Chaos.

Scott’s Cleansed offers enough quirk on top of the familiar that the snappy tempo makes the book a quick and exciting read. Unlike other writers that slog the reader over every continent, mountain range, and ocean, Scott understands that no one needs to see the entire globe to feel gravity. The book primarily takes place in one city, and most of the scenes actually occur in or around the same tavern.  Admirably, Cleansed dedicates it’s pages to putting characters together and keeping the background where it should be.

While familiarity and the use of certain tropes are not automatically drawbacks (and how could they be when they are impossible to avoid entirely?), there are some legitimate issues to take up with Cleansed.  For example, scenes often begin or end at the wrong moments in time, making them either unbalanced or extraneous. There are editorial issues such as misused homonyms or dropped words. And these small items can be overlooked, but what is less escapable is a badly managed point-of-view. The book can loosely be described as 3rd person “close” or 3rd person limited omniscience with respect to the lead character, Dirge. That is the construct that the text follows. Except when it doesn’t. At times it drifts into the first person of Dirge. At other points the 3rd person omniscience balloons to include other characters’ interior thoughts simultaneously. At other points still, the limited 3rd person will focus on a side character’s interiority and exclude Dirge, and this doesn’t occur in any meaningful serialization. It doesn’t happen all the time, which would be more acceptable, because then it might represent a gimmick with which the reader could build a stable, albeit annoyed, pattern or logic. The fact is, the POV slippage happens irregularly.

For some readers, point-of-view grievances are pedantic. For others, they are deal breakers. If you are the former, G.S. Scott’s Cleansed will provide you with a fun, fast read that is action packed and well worth the time.