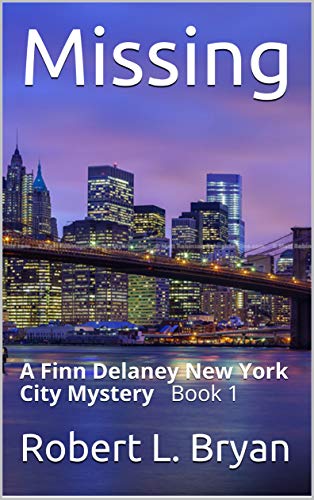 Mystery readers who love New York: this book is for you. Missing: A Finn Delaney New York City Mystery introduces 25-year-old Finn, a fifth-generation police officer from a family that reveres the NYPD. When an unlucky accident ends his NYPD career, Finn becomes the next best thing: a Private Eye. Finn’s new career is off to a rocky start, complete with threadbare office and octogenarian assistant. Luckily, Finn quickly moves beyond the so-called “cavalcade of crazies” and stumbles into his first serious case. Follow Finn as he searches for a missing person who NYPD claims is not missing at all.

In Missing, Robert L. Bryan explores duty, loyalty, and friendship. He also plumbs the depths of vice that simmer in the city: corruption, greed, and crime. Bryan hits his storytelling stride as the details of the case unfurl. The plot moves quickly with confounding clues, hints of danger, and a parade of compelling characters.

Bryan has a knack for provocative characters. Finn’s apparent lack of self-determination can be frustrating—he seemingly rode a conveyer belt from booties to NYPD blues—but he develops into a likable main character. Early client stories, like the time Finn tailed a cat, are charming but lose something in bullet point format. The reader groans when Finn’s most pressing professional dilemma involves a desk chair and cheers when he finally lands a case.

Still, Finn is inscrutable. Other characters respond to him with generosity and affection when he shows none. I think the women in Finn’s world would benefit from added nuance; they are often one-dimensional. Finn’s father is a bright spot: unwavering in his support and helpful when Finn needs it most. We should all be so lucky.

Fans of the boroughs will enjoy devoted descriptions of Queen’s minutiae. Every intersection is noted, every landmark observed. Do I see a Finn Delaney walking tour of Queens in my future? Yes, please.

The book doubles back at times with Finn uncovering clues already revealed; in one notable situation, Finn hits upon the lynchpin of the case twice in seven pages. The book is lightly sprinkled with errors in grammar and punctuation. Despite these minor distractions, Missing is a satisfying mystery and a good read.