Sometimes you have to dance in the minefield …

Navy SEAL, JD Cordell, is ready to retire and take his K9 partner, Ajax, with him. JD has exciting plans for a new life that includes the courageous and beautiful Doctor Ellen Chang he met on a mission in Niger.

But when JD’s father unexpectedly dies of cancer, his grieving mother, Mai, travels to Vietnam to search for her adopted Montagnard brother, a brother she hasn’t seen in over forty years. During her attempt to track him down, Mai unwittingly steps into a blood feud between her Montagnard brother and a powerful Vietnamese drug lord, a bitter hatred that began during the Vietnam War.

When his mother disappears into the seedy underbelly of Ho Chi Minh City, JD has no choice but to come out of retirement for one last explosive mission. And Ajax is with him all the way.

To Regain a Purpose

Montagnard follows an ex-Navy Seal into the seedy underbelly of Ho Chi Minh City to rescue his mother. What was the inspiration for the setup of this exciting novel?

From my standpoint, going back to find her lost Montagnard brother is simply something that a strong woman like Mai Cordell would feel she had to do. First, she would feel she owed her adopted brother a considerable debt. And second, after losing her husband to cancer, she would be looking to regain a purpose in her life. Anytime you have an internal struggle in a country such as the war in Vietnam, there are bound to be unsettled scores and hatreds. Look at our own Civil War in the US. If her Montagnard brother were the fierce warrior and ally to the American Special Forces serving in Vietnam described in the first book in the series, an old feud such as the one in this story would likely exist. Then, what kind of Navy SEAL, retired or not, would not attempt to rescue his mother in such a situation, where diplomatic channels would be all but useless.

JD Cordell is an intriguing and well-developed character. What were some driving ideals behind his character development?

Okay, so I have to admit that JD is a composite character made up of some of the character traits I have that I am proud of, and some of the character traits I admire in others and wish I possessed. While not a Navy SEAL, I am a combat arms US Army veteran and served with the 101st Air Assault Division. I have 35 plus years of martial arts training and graduated from the top private bodyguard school in the US. I have good friends who were Vietnam Veterans, and I have met a few former Navy SEALs. This background gave me a broad framework from which to develop the character of JD Cordell. I mostly pulled the best from all of these resources to mold the kind of man I wanted my main character to be.

The book takes place in Vietnam and Ho Chi Minh City. Why did you pick this location for the setting of your novel?

Well, much of the story takes place in the area north and west of Ho Chi Minh City (formerly Saigon), and I need a location that readers could identify with and visualize. It had to be a city with a thriving travel and tourism industry, and it had to be modern enough to have a seedy underbelly; bars, night clubs, brothels, and corrupt officials. It also had to be a large enough city that people from the persecuted Montagnard tribes could go there to hide and eke out a living. Ho Chi Minh City was the obvious choice.

This book is the second in your JD Cordell Action Series. What can readers expect in book three?

In the third installment, we will see more of Hana Hahn, who played a massive role in helping JD rescue his mother. Hana’s character is the redemption thread through the Montagnard story, and by the end of the tale, she has a new purpose in life. That purpose is going to run afoul of a human trafficking ring operating between South East Asia and the US, probably via the Philippines. JD Cordell, with a few other returning characters (and perhaps one new one), is going to have to step in to rescue some of their victims. These will be young women that Hana Hahn is working with. Pallie and Vivas will both return, and we might see a little more of Rick Hahn, Hana’s father. Of course, there will be the requisite “relentless” action, martial arts, and perhaps just a touch of romance. Again, it is really about having a sense of honor and loyalty and doing the right thing even when nobody is looking. 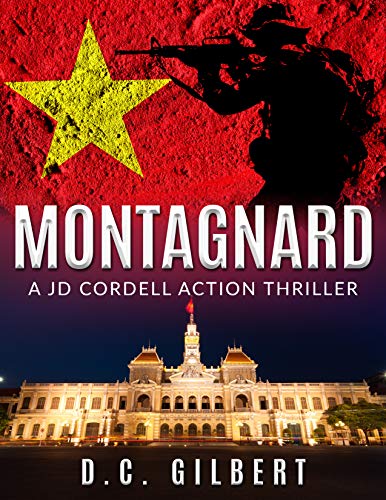 Montagnard continues the story of ex Navy SEAL JD Cordell as he tries to put together a new life with his trusty dog and a beautiful woman. But things go awry when his mother travels to Vietnam to search for her adopted brother who has gone missing in Ho Chi Minh City. JD’s mother is caught between two bitter rivals and their dangerous feud. This leaves JD with little choice but to intervene, with explosive results.

Montagnard has all the elements I look for in a good action adventure story. JD Cordell is capable enough, and it’s not a matter of if he can overcome the seemingly insurmountable obstacles in front of him, but how. This is where the novel really shines. JD Cordell is electrifying and easily holds readers interests. I really enjoyed the depth of JD’s character. D.C. Gilbert brings him to life through action and consequences drawn in blood throughout the pages.

Ho Chi Minh City is vividly painted and captures the exotic yet sleazy side of a historic city that is in flux. The action in this novel is relentless and well detailed. The tense story line reminds me of the movie Body of Lies or Jack Ryan. D.C. Gilbert effortlessly blends martial arts, weapons and military tactics that will thrill any military aficionado.

I enjoyed the threads of historical context, and consequences, sprinkled throughout the story as it relates to the Vietnam War and how the Americans pulled out so abruptly leaving so many allies hanging.

D.C. Gilbert has crafted a taught military action novel that explores humanity at it’s most vengeful. This is a thrilling novel that is elevated by intriguing characters in the midst of an exotic location that holds danger around any corner. A great continuation of the JD Cordell Action Series.