The Darkness Within Him

Project Purple follows volunteers on a broadcasted experience to recreate American colonization that turns deadly. What was the inspiration behind this unique idea?

“Project Purple” Is about thirteen Americans who recreate the lives of the early colonials for a worldwide on-line audience. They don’t know their ordeal has been gradually, brutally altered by their organizers, and a struggle for food, shelter, and survival turn deadly as an Arctic winter approaches.

The seed of this idea emerged from a conjoining of two mediums—the first being a PBS TV series called Colonial House back in 2003, and the second being an extraordinary novel about the harrowing saga of the Donner party called “The Indifferent Stars Above.” Somehow, the ordeals of these people from different centuries fused.

I think “Project Purple” seeks to understand what it takes to draw on one’s inner survivor. I just started thinking: What could a writer do to give this story more adversity and more propulsion?

Rigor is a detective from Las Vegas who sets out to help the volunteers. What were some driving ideals behind his character?

I wove Rigor into the story to give it another layer of depth. On the surface he’s an upstanding guy. He’s initially driven by noble ideals, but as his story unfolds, we see the darkness within him, too, and that’s why he’s been selected for new “projects”. The Rhizome, the shadowy multi-national underground faction, knows his history.

This novel is able to capture the history of American colonialism and modern dystopian ideals. What were some ideals you wanted to explore in this book?

I guess I wanted to capture the idea that civilization is a thin veneer we lay across the bubbling magma of nature, including human nature. Occasionally, like a volcano, the magma erupts, and we fall through the crust, scratching and gouging for our lives. Then a new world order begins, with an entirely new language, and with an entirely new taxonomy: a new way of ordering and naming things in life—the Rhizome.

The thirteen Americans are under the impression they’re showcasing the early seventeenth century colonial way of life for a worldwide audience; that they can teach others by reenacting “a simpler, purer time in their national experience, to the roots of the nation they are today, to the infant of America.” Of course, the Rhizome isn’t impressed by any of that. What it wants to learn from the Americans is all together different.

The project I’m on now, “Assunta” is a three-part trilogy about a man who comes to believe in the divine. It’s a physical and spiritual journey from the gates of Hell to the highest portion of Heaven. The story is built on a framework of references to the great poem “The Divine Comedy” by Dante Alighieri. There are three books: Inferno, Purgatorio, and Paradiso. I’ve just finished Book 3, and will publish them in one month intervals, starting in early March with the first Book, Assunta: Inferno.

After I finish the Assunta trilogy, I’m returning to sequels of The Cuckoo Colloquium —about six teens lost in the rain forest of Borneo, because the characters have so much depth and the story so much fuel remaining. I hope to have book #2 of what I’m calling the Cuckoo series out by autumn, 2019.

I believe that memorable characters make memorable tales. One of my favorite writers, Samuel Becket, for example, shows us lunatics in trashcans, or characters who set themselves on fire. He had great insights into what is true, and he makes it funny. I think that’s my job, my goal—to write characters and stories that are absurd, violent, childish, but that resonate with truth.

Thirteen Americans volunteer for a unique three-month project to recreate America’s early colonial experience for a worldwide on-line audience. The colonists have been deceived. They don’t know their ordeal has been gradually, brutally, altered by their organizers, and a genuine struggle for food, shelter and survival turns deadly as an Arctic winter approaches. Is there some point to this insanity? The besieged Americans (including a police detective who throws his world away to rescue a colonist he knows only as the Goatwench) must find the primal survivor within themselves to counter the ever-increasing violence they face—all to the attentive schooling of their multi-national audience. 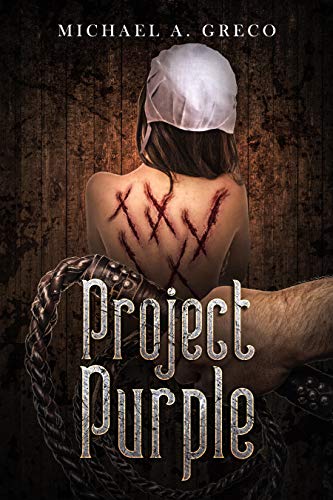