Sixty Position With Pleasure follows a man who struggles to make sense of a mind-boggling mystery while being a politically active citizen experiencing an exciting affair. What was the inspiration for the setup to your story?

My genre is mystery thriller but in this novel, as in my previous two, I always aim to place the story in the context of an unusual setting. My first novel was set in the recent past (year 1990), my second in the present, so it was almost a logical progression to set my third in the future (year 2050). I tried to imagine what it would be like for a small mountain and lake side town in Ireland to become one of the minority of places in the world to actually benefit from climate change, through developing into a tourist hotspot. The futuristic elements are small but nevertheless significant, like the household food pot which uses genetically modified micro-organisms to churn out meat-protein, flours and spices. And the 3-D home entertainment system using holograms to create a theatre in your living room. And of course, robots, which have moved beyond ‘artificial intelligence’ to ‘artificial personality’ even to the extent of being able to make spontaneous witty comments. This futuristic town provides the background against which the mystery is played out. It starts simply enough with a hit-an-run accident, but develops into an increasingly complex puzzle, culminating in a surprise reveal and what I hope is an even bigger surprise for the second reveal at the end of the novel.

Charlie Gibbs is a fascinating character. What scene was the most interesting to write for his character?

Charlie is placed in many different scenarios, some pleasant, some difficult, all requiring him to draw on his personal resources in different ways, so it was interesting to figure out what he would do in each situation. I would have to pick out as a personal favourite the scene where the annoying alpha-male sales manager, Hogan, asks Charlie to translate into Dutch an invitation for sexy new boss, Ilse Teuling, to go out to dinner. Charlie translates, but slips into the Dutch a warning that Hogan is a total !***! and persuades Ilse to dine with himself instead.

Recent political events, both in the USA and the UK, are the target for the political satirical elements of the plot. Anther contemporary issue touched on is women’s rights. Also religion, though more the behaviour of ‘the religious’ rather than religion itself. However the novel is primarily intended to be an entertaining and absorbing story into which these more serious elements are lightly woven.

When and where will this book be available?

The book is currently being prepared for print, Kindle and epub formats to be sold through my website, Amazon, Smashwords and other outlets. Expected publication date last week of December, but may be a little earlier.

Sahlan Diver’s Sixty Position With Pleasure is an intricate mixture of erotica, mystery, and futuristic themes. Set in 2050, it follows the life of Charlie Gibbs – an English man who just moved to a small Irish town – Kilgarney. As a computer specialist freelancer, he is tasked with undertaking a tedious job at a local company.

As the rest of the world is reeling from the aftermath of global warming, Kilgarney is prospering. It has lost its former freezing weather, leaving it at just the ideal temperatures – not too cold nor too hot. Coupled with the town’s newly-formed lake and beautiful scenes, everything seems to have suddenly conspired to make Kilgarney a tourist attraction.

But while this brings in extra revenue, it also attracts powerful yet manipulative people to the town. This culminates in a political power struggle and a game-changing referendum to decide whether Kilgarney should be an independent state. Amid all this political turmoil, strange things are also happening in Charlie’s personal and work life.

For one, his boss dies mysteriously, bringing a new woman to his life – a woman with sexual demands that are beyond the ordinary. All through the book, we see Charlie struggle to make sense of a mind-boggling mystery while being a politically active citizen experiencing an exciting affair.

Since most of the story is told from Charlie’s perspective, it is really relatable. We get a clear understanding of who Charlie is and can truly empathize with him. The mystery part of the narrative is particularly riveting because we only know what he knows. As such, we are also quite invested in finding out who the bad guys are.

If there is one thing that makes this book stand out though, it has to be its unpredictability. The author does a good job of giving us clues while still leaving us in the dark. From page to page, we learn new information that makes us more interested but still struggling to create a pattern.

Clearly, the author took their time to create a solid plot. Beyond that, they managed to mirror our current society and the issues that usually divide us. Within this book, issues like climate change, religion, politics, and women’s rights are tackled in interesting ways and seamlessly woven into the narrative.

Moreover, the writing is light yet informative, sometimes even humorous, making the book easy to read. Ultimately, considering its level of complexity, it was executed beautifully. Sixty Position With Pleasure is a provocative and thrilling novel that will leave you with plenty to ponder.

The Murderer Who Doesn’t Exist

For The Love of Alison follows David who is a witness, and eventual suspect, of a murder who must rush to clear his name. What was the inspiration for the setup to this thrilling novel?

In my first novel, The Secret Resort Of Nostalgia, I had a clear idea from the outset what the big mystery was and how the surprise reveal at the end would be done, so I only had to fill in the detail. This second novel, For The Love of Alison, was written the other way round. I started with a few details, like the unconventional college friend who marries a respectable solicitor, and the weird guy breaking into a house in a clown suit to perform a scene from a play, but I had no plot other than a vague idea about a murder which comes back to haunt the murderers. In fact, looking back, the material was so thin, it’s surprising that I thought it worth continuing. Only after I got the opening idea of “the murderer who doesn’t exist” did all the other ideas come thick and fast.

David is a London newspaper columnist, and I found his character to be interesting and well developed. What were some themes that were important for you to capture in his character?

I always create my central character as “man-in-the-street” and deliberately write my novels as first person narrative. Basically, I am saying to the reader: if you were put in this extraordinary situation that the protagonist finds himself trapped in, how would you try to get out of it? So, it’s important the reader can empathise with the character. He needs to be resourceful, persistent, basically a good guy at heart, whatever problems he might be experiencing in his life. And in this novel there is the initial element of uncertainty – has David fully recovered from his mental illness; how much can we trust what he is telling us?

I enjoyed the mystery embedded in this story, and the twists that came sudden and often. Were these planned or did they develop organically?

A mixture of both. For example, there is a startling twist about ten chapters in that sets up the fundamental mystery. I suddenly realised I could do something with the Alison character that would raise it above the level of a mundane, missing person story. The problem then was to come up with a resolution that readers would find convincing. I remember telling a friend I’d dug myself a very big hole and didn’t know how to get out of it. That’s where the organic plot development comes in, devising connections between people and events that make the apparently unfathomable all seem simple and obvious after the fact. However, it’s no pleasure for the reader if they guess too early, so I constantly misdirect, making it look like a situation is like this, or a character is like this, only to end chapters with a twist that effectively says “you weren’t expecting that, were you?”

I have started on a third novel, which is more ambitious than the first two. It will have a central mystery and a central character who tries to unravel it, but there will also be a number of parallel plots involving political opportunism, environmental emergency, religious fanaticism, even a semi-erotic situation between the 20-something protagonist and his 50 year old boss. The setting will in the future, the year 2050, at an inland lakeside town in Ireland that has become a booming European tourist destination due to climate change. Optimistically I might finish by December 2019, but the following summer is a more likely time-scale. 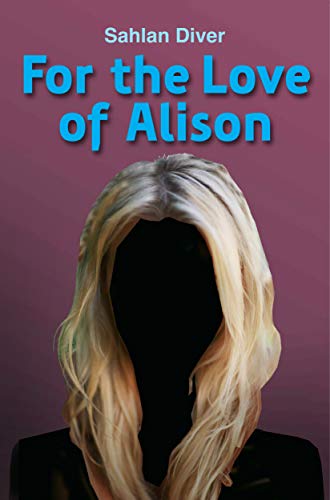 Journalist, David Buckley witnesses a murder. Only one problem – the murderer doesn’t exist, so now Buckley’s the chief suspect, and he’s on the run. Can he prove his innocence – and his sanity?

Student David Buckley’s obsession with fellow student, Alison Tindell, led to hospitalisation for mental illness. Thirty years on, Buckley, now a successful journalist, receives a surprise phone call from Alison, inviting him to visit. That same evening, a murder occurs; Buckley is accused, and Alison, his only alibi, vanishes. The police don’t believe she ever existed. Buckley escapes, travelling the country in a desperate search to find her before the law catches up. But someone else intends to find Buckley first, a person he fears more than anyone.

For the Love of Alison

For the Love of Alison by Sahlan Diver is a mystery novel following David, a columnist for a newspaper in London, who is framed for a crime he didn’t commit. Or did he? In a moment of insanity. Out of the blue, David receives a call from a woman from his past. Alison invites David to visit her, but then, later that night David is arrested on suspicion of the murder of Jack. Alison has disappeared. Where did Alison go? Did she lure David in just to frame him for murder? Is anything David thinks he knows actually real?

The book intrigued me from the first chapter. I really enjoyed all the twists and turns in the story. The intrigue kept me guessing and there were several things that were revealed that came as a surprise. But at times, there were so many different pieces of information that it was a bit difficult to keep all the facts straight.

The ending of the story is bitter. I can’t say much more without giving away the ending, but it’s not an ending I was expecting at all. The characters in the novel were all superbly developed and you get drawn into their characters actions so much that you either love them or love to hate them or their actions.

For the Love of Alison is immediately captivating and consistently engrossing. With plot twists in every chapter that kept me on the edge of my seat, always guessing, judging, and flipping pages.