I Wanted My Vampires To Exist

Scarlet Ambrosia follows a man who faces a life-altering choice after meeting a beautiful vampire and learning of a secret and dangerous underworld. How did you come up with the idea behind this novel?

Believe it or not, the story began with a question: How does a nice Jewish accountant tell his parents he’s been turned into a vampire? I’m from a conservative Jewish background, and I was very close with my parents while they were alive. I tried to imagine myself in the lead character’s shoes. How would he deal with this life-changing event in the context of his relationships with parents, siblings, brother-in-law, and a very close friend and business associate? The story grew from there.

What were some new ideas you wanted to introduce into the vampire genre?

I wanted my vampires to exist during the day without the sun burning them up. They are living, breathing, human vampires. They are not “the undead.” They are not immortal. They can be killed if they are injured badly enough. I wanted to make these characters more human and relatable by changing the stereotypes. I took a close look at a vampire character who heads up the Vampire Council and the key role he plays in preparing the romantic couple (Devon and Mathilde) for their ultimate confrontation with the rogue villain. The villain (Egon Schiller) is up to some highly unusual evil in his bold flaunting of the Vampire Council’s rules.

What scene did you have the most fun writing?

In Chapter One, Devon meets a beautiful stranger (Mathilde de Roche) in a bar. I loved writing the subtle interplay of their dialogue in this scene. It came to me naturally and spontaneously. I did, however, extensively edit the first chapter.

Do you plan on writing more supernatural romance stories?

I will most likely write a sequel to “Scarlet Ambrosia” when the time comes. 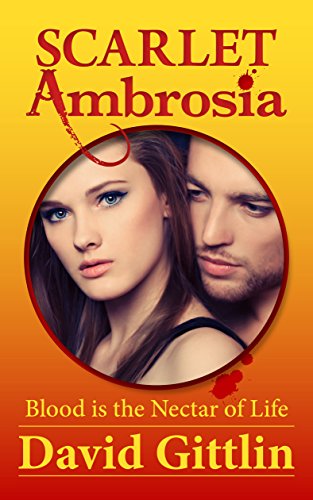 Prize-winning citizen journalist David Gittlin visits the monster to talk about his novel Scarlet Ambrosia. We talk about the third most popular profession for Jewish men, the emotional turmoil of his characters, and how he discovered the meaning of life, the universe, and everything (alright, maybe he didn’t figure it out, but it would be cool if he did).

I liked the idea in Scarlet Ambrosia that there was a workable cure for vampirism. How did you come across this idea and why was it important in the story?

I wanted Devon to have the possibility of reversing his condition because he didn’t choose to become a vampire. He has three major conflicts to resolve in the story. One of these conflicts involves his relationship to his parents and his business partner and friend, Nadine Van Zandt. If he fails to find a cure, these relationships will be seriously compromised or worse; lost entirely. The stakes keep getting higher as the story unfolds. If Devon fails in his struggle against Egon Schiller, Devon has a lot more to lose than his small circle of friends and remaining family members.

Devon is an accountant in the book. How does this play into his characters’ development and your writing for his character?

When the story begins, Devon is attempting to take more control of his life by becoming an independent entrepreneur. Accounting was not his first choice as a profession. He went to law school and then spiraled into a self-destructive habit of cocaine addiction. In psychotherapy, he discovered that his behavior stemmed from an unconscious desire to avoid the shadow of his highly successful father, a prominent defense attorney. With no desire to practice medicine, Devon chooses the third most popular profession for upwardly mobile Jewish men. Devon’s conventional background makes his transition into vampire hood even more shocking, stark, and frightening.

In Scarlet Ambrosia, there is a ruby that magnifies the vampire’s powers along with other mystical things. Where did you get the idea for this? Was it through research or a flash of inspiration?

It was the result of both research and imagination.

Devon goes through some dark and difficult emotional turmoil in the story as he grapples with being a vampire. Are there any parallels to your own life in the story or is his character purely fictional?

A year after writing Scarlet Ambrosia, I see the story through a different pair of eyes. At the core of the novel is a young man’s struggle with darkness and light. The vampire archetype, I now realize, is a metaphor for my heart’s dream to realize its divine nature. The supernatural powers and ramped up energy level Devon acquires as a vampire make him half-human and half-god, something like the mythological Greek gods. He can choose to use his new powers for good or evil purposes. I believe everyone has the potential to become a divinely human being. I’ve been a spiritual seeker for most of my adult life. Awakening isn’t easy, but I’ve found it’s worth the effort.

That’s a great question. I’d have a tough time as a vampire, but on the other hand, I think Mathilde would be too good of an option to pass up.

Are there any other books that you’re coming out with that your fans should be on the lookout for?

Yes. For fans who like speculative fiction and an imaginative premise, check out my first novel, Three Days to Darkness.

Can’t get enough of David Gittlin? Well, here is his website http://www.davidgittlin.com/ 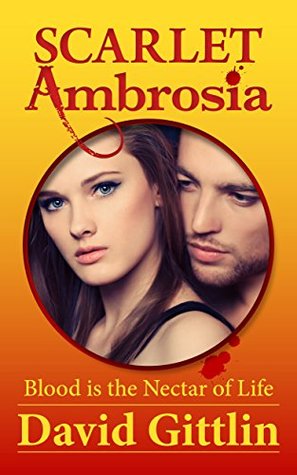