What can loneliness drive us to do?

Adam Frankenstein: Search for a Soul is a collection of thought-provoking short stories. What were some sources that informed your writing?

First, I read Mary Shelley’s Frankenstein: Or The Modern Prometheus. I knew the Universal Studios and Hammer films weren’t true to the book, as movies often aren’t, and I wanted my Frankenstein to be based off the book. In the book he is a sympathetic character, but becomes a murderer. He’s not given the chance to redeem himself and I wanted that opportunity for him.

Next, I read about Mary Shelley. It was important to me to get inside her head and understand her motivations. I watched the movie about her life and I read several books about her including Mary Shelley: Her Circle and Her Contemporaries and Mary’s Monster: Love, Madness, and How Mary Shelley Created Frankenstein. I read university papers about her life and spoke to professors and other experts.

I’ve always been a fan of horror. I love the classics. I’ve read and reread so many classic horror tales that I plan on tapping into as I write. I read modern horror as well. I want to be able to appeal to the modern reader while intriguing them with classic stories.

Adam is an intriguing and well developed character. What were some driving ideals behind his character development?

I’ve always felt especially drawn to two fictional characters in my life; Frankenstein’s monster and Jane Eyre. There’s something about a person who is all alone in the world trying to be better even when no one else might care about their life. I admit that Adam has some traits you may find in Mr. Rochester. Rochester warred with himself, justifying what he did even when he knew it was wrong. But, he had such passion the reader forgave him his past deeds and wanted to see him become the man Jane deserved.

In the novel, Frankenstein, the monster, who I’ve called Adam, is intelligent and realizes his own plight. He’s not the green-faced monster of the movies. His acceptance of the world’s rejection of him drives him to insist on a companion so he won’t be alone. I think we can all relate to feeling alone in the world at some point in our lives. What can loneliness drive us to do?

I knew immediately that the only way to keep Adam from becoming a true monster was to give him love and let him experience love for someone, or something else. A life totally devoid of love will certainly make anyone a monster. I gave him Bella, his little dog who also happens to be immortal. It wasn’t just the fact that dogs will love you no matter what you look like as long as you’re kind, but it was Adam’s experience of loving and of knowing he had the capacity to love that changed the trajectory of his life.

The Madame and the Madman is my favorite story from the collection. Do you have a favorite, or one that stands out from a writers perspective?

Although I admit to loving any story Victor Dracula shows up in, such as The Madame and the Madman, my personal favorite to date is Marked. It can be difficult to show character growth in short stories. And though I hope to show a little of that in each story, I felt Marked showed the greatest growth. Adam starts out a total brute willing to kill someone for kicking his dog. He’s calculating and unsympathetic to Seline at first. But, the little girl and her acceptance of him change things in Adam. Knowing that Sabine is not the girl’s mother, but is risking her life for the child change something in him. I love who he is at the end of this story.

I recently signed a contract with an amazing agent who is excited about Adam and the other stories surrounding Mary Shelley’s League of Supernatural Hunters. I’m doing the final edits of The Deadly Pieces, which is the first full Adam Frankenstein novel. It’s set in modern times and he has become a U.S. Marshal in Houston, TX. He’s secretly after a witch conducting unsanctioned experiments on the homeless population. So, there’s still the paranormal element though I do work with an actual U.S. Marshal to ensure any procedural parts of the book are correct.

I do have Adam Frankenstein comic books and am currently working on his origin story according to my own mythology. That should be out the first part of next year.

Adam Frankenstein: Search for a Soul 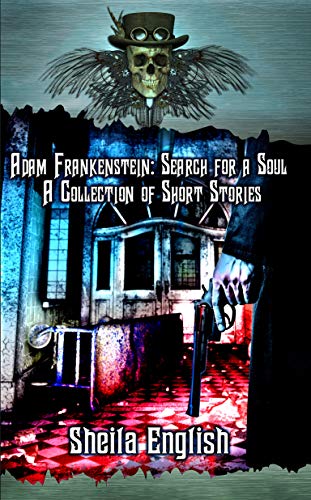 A more modern and brutish man than one may expect, this monster embodies both of his namesakes rather well, the innocent first man of lore and the man-made of many. The monster we meet in the collection Adam Frankenstein: Search for a Soul by Sheila English is all at once stoic and terrifying—yet he counts Mary Shelley and Van Helsing among his friends here.

In this continuation of a story we thought we knew, meet the man-made man for hire, Adam Frankenstein. He is not without his charms, however hideously disfigured. Some characteristics we may remember do remain; he is a man of few words, gigantic in stature, and will kill in terms of black and white logic. Adam has an unsettling presence yet, is profoundly gentle.

Poetically, and by murky gaslight, Sheila English dazzles the reader with pressing adventures and a companion by our side. Adam travels with his loyal dog Bella, who he protects to the bitter end of all who cross them.

In the first novella, Marked, we meet the street-wise Sabine and her charge, the young Celeste, who require help though at a glance we know they must have tremendous problems as both are more than capable of defense and have made their way through dark city streets until now, however they could.

Then, a monster’s point of view short story Last Man Standing leads the reader through a terrifying nightmare as an angry mob hunts Adam. Written in first-person, the shift is not as jarring as expected. This story is at least a refreshing change of pace and being the shortest story does not overstay its welcome. We land again on the cobblestone streets of London in another tale where we meet a vampire ally in The Madame and the Madman. While this is another kind of Dracula all together, the weaving of cherished horror stories together always makes for an entertaining read, and here is it done with both flair and grit. The reality of the sooty and smelly 19th century is used to brilliant effect in describing not only the fast-paced and bloody action, but what scant leisure time Adam is afforded. Between the two, English gives the reader a glimpse into what our hero sees in mankind when looking out of a monster’s eye. A very thoughtful creature Adam Frankenstein is, and one that readers of historical fiction and horror alike will be glad to have met.

When we come to the modern world of 1976 in Freak Show, the stage is set since we now know Adam and his cut and dry way of reasoning. Considering the people he encounters, it is a balancing act in each story to decide which of the two sides are truly flawed – questions that good fiction raises in a reader reflecting on society, and our wants and needs as earthly inhabitants. While there is a bonus story in this collection, Doll Therapy, that fits in bleak outlook and poetic prose and is presented separately. Other stories by the same author feature the titular Adam Frankenstein and with luck, there will be a larger collection for them all someday. It would be an opportunity to update the cover art as it does not reflect the high-level character crafting and adventurous ideas here that lead to wanting to read more. Adam Frankenstein himself is all five stars of five in here and recommended for a highly entertaining read that puts a cavalier edge on this classic human monster.