More of a Mystery

The Crown Princess’ Voyage is a genre-crossing novel with elements of a fantasy, history, and romance as well. Did you start writing with this in mind, or did this happen organically as you were writing?

I did always want to hit a variety of notes since the 2006 zero draft of the first book in the series, The Gift-Knight’s Quest, that was meant to be more of a mystery. That sort of multi genre crossover continues here, as more of a natural follow-up. I also felt that I needed whichever elements would tell these characters’ stories in the most complete way.

You see it more in the next book, maybe, but I liked writing Jan’s branching-off point. He is this purely obedient, trustworthy guard for about a book and a half, then he becomes his own character with his own plot thread and nothing is quite the same. I like a few of them but he springs to mind quite easily.

The background and backstory of the characters is very detailed. Did you do a lot of research to maintain accuracy of the subject?

I let my knowledge from various studies and other books just synthesize, I decided what naming conventions and characteristics each culture featured, and it became more of an effort to keep it consistent. Especially character names which have been changed before. I think a lot of research just casually occurred on the internet over time, but also came out of my secondary Bachelors degree in Social and Political Thought which had components of anthropology and history.

What is the next book in the Gift-Knight series that you are working on and when will it be published?

I have an official third book of the trilogy which was written in 2011. However, I must revisit it, because I need it to be the caliber of The Crown Princess’ Voyage or possibly better, in order to feel right about how the trilogy is closed out. You might be intrigued to know that this past November, I decided I liked Alathea enough to write her a book. This last project is meant to be stand-alone and tell her full story from late childhood to the start of “Trilogy time”. Including a revisit of scenes you have now already witnessed through Rheb’s eyes or otherwise. Keeping it fresh without contradicting what you have already read will be a challenge but I look forward to it, when I get back to it. Book 3 will become a priority.

The Crown Princess’ Voyage is the second book in the “Gift-Knight” series of fantasy novels. It continues the story where The Gift-Knight’s Quest leaves off, developing familiar characters while introducing new ones, and showing you more of the fantasy world illustrated in Steven Sandford’s original map. Chandra’s been pushed to her wits’ end trying to keep the peace in Kensrik, the world’s largest empire; trying to spare the lives of subjects who don’t necessarily want to be ruled, who have difficulty viewing her reign as legitimate. For all her efforts, they may just banish her from Kensrik and embrace uncertainty.

Except it’s not just Kensrik facing a new and dire threat, one to whom the past conspirators threatening Chandra were mere puppets. No one has any idea what’s about to hit them, and no place in the world will be safe. 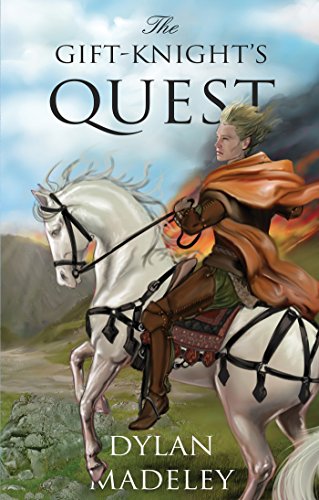