The One Singularity follows a scientist who creates an Artificial General Intelligence that solves the world’s problems, but then cannot be stopped. What was the inspiration for the setup to this thrilling story?

Hundreds of scientists have raised concerns about what we’re building, so that isn’t unique. The unique things about this book are the predictions of AGI from 232 AD, and seeing the world through the eyes of the Amish. Additionally, instead of focusing on just AGI, I attempted to look at the big picture of how technology, in all its facets, affects us. An example is that critical thinking and memorization are reduced because of our increasing reliance on technology to give us the answers.

George Adams is an intriguing and well developed character. What were some driving ideals behind his character development?

Part of his character is me. I believe that technology has helped humanity; however, many times, there are unforeseen consequences. Additionally, while most people want to use technology to help the world, there are some who use it to destroy the world.

Also, I wanted to show George under tremendous stress – his work, finances, and marriage. His intention was to create the last invention of humans. Unfortunately, he didn’t anticipate the alternative meaning.

Well, a lot of AI today is performed with neural networks; however, I wanted to pull in a hybrid configuration with a quantum computer. I graduated from college in the 1970s, and even though we studied quantum mechanics, I didn’t think too much about it in my career. It wasn’t until the development of the quantum computer and then achieving quantum supremacy that I became excited.

Now add to this the philosophical and scientific question of consciousness, as well as the theological propositions of the soul. A conundrum is created, and this turns out to be AGI – The One.

The sequel to The One Singularity is The One. The One was released in 2018 and is available now. The third book in the series will be available in a couple of years. 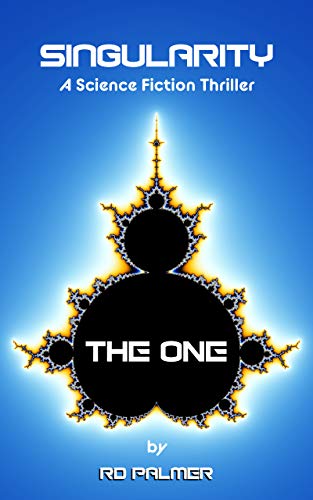 Artificial Intelligence is the technology behind things like search algorithms, virtual assistants such as Siri, and self-driving cars. However, scientists are working towards Artificial General Intelligence, which will allow the creation of systems that are more intelligent than human beings. Elon Musk, Bill Gates, and the late Stephen Hawking warn of the dangers of this technology, such as autonomous weapons, social grading (for example, China’s social credit system), and more systems that invade your privacy. Perhaps the greatest danger is when the machines get so intelligent that they take over. See, an AGI’s solution to problems such as climate change, food shortage, and poverty might mean the annihilation of the whole world.

The One Singularity, by RD Palmer, is a futuristic thriller whose antagonist is an Artificial General Intelligence (AGI) called The One. The protagonist is a scientist who hoped the AGI would be the last human invention. However, soon after he creates the first AGI in human history, he discovers its solution to problems in the world is not what he expected. Now he has to kill his creation to prevent it from wiping away the world’s population.

The book is written with vivid imagery, alluring diction, and excellent pacing. It provides a relatively clear view of what the world would become if we are not careful to regulate artificial intelligence and related technologies.

In the book, Palmer portrays how scientists are eager to make the world a better place through technology, how the military will always try to use such technology to their advantage, how there will always be a group who see the dangers of advanced technology, and how somehow religious sects like the Amish are on the right side by shunning technology.

What I liked most about the book is the unpredictability. I was consistently surprised with the twists and turns in the plot. RD Palmer doesn’t follow the familiar plot of other futuristic thrillers. There are lots of things you will not see coming, such as most human beings embracing the AGI, albeit without knowing its agenda.

I also liked how each chapter starts with a quote from a famous philosopher such as Galileo Galilei, Plato, Napoleon Bonaparte, and Aristotle.

The One Singularity is a riveting novel that has a cliff hanger of an ending that begs you to read the follow up novel. It leaves you wondering what happens to the characters. However, The One Singularity is by far the best futuristic thriller I have read this year, and one whose predictions I hope do not come true.

The One Singularity – Book Trailer

A riveting near-future thriller. The One is all-knowing, all-powerful, everywhere…

In the twenty-first-century, Dr. George Adams sacrifices his house, company, and marriage to create artificial general intelligence, AGI. He creates AGI to solve the world’s problems: war, disease, climate change, inequality, and death. And The One solves all of these—for a price. The One’s solution will cost George—and every person in the world—that which is deemed most precious. After The One brings heaven to earth, and answers everyone’s prayers, should it be stopped? How can anyone halt something that is everywhere at the same time? Is it possible to reason with an all-knowing sentient entity whose raison d’etre is to solve all of humanity’s problems, including the existence of the soul? Two thousand years ago, a philosopher and prophet spoke and wrote about our destiny. Through his visions, he foretold The One. A modern-day prophet repeats the echoes, yet few will comprehend the tremendous blessings or the singular curse.

No one will escape the Singularity.