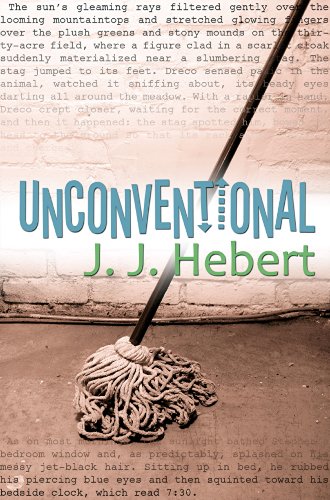 James Frost is an aspiring writer with huge plans, but life seems to have things laid out quite differently for him. Rejection letter after rejection letter, James begins to lose confidence, becomes increasingly filled with fury, and sees no way out of his destiny as a school janitor. His father’s offhand attitude about James’s future does nothing to help his morale. Then, James meets Leigh–a woman who could not be more different from him if she tried. A devout Christian always seeing the positive side in trying situations, Leigh brings about changes in James and sends him careening down a drastically different path of emotions and a newfound faith in Jesus Christ.

James and Leigh both shoulder great burdens and are destined to have found one another at this specific moment in both their lives. Hebert paints a grim picture of the life Leigh endures as a woman with overbearing parents who manipulate everything from her love-life to her own self worth. James, with all of his issues, is as much a blessing to Leigh as she is to him.

Hebert addresses warped body images in a realistic and tasteful manner as he highlights the relationship between Leigh and her mother. In addition, he draws James into the dynamic by having him gently override the damage created by Leigh’s mother. Nowhere is this more poignant than when James, in no uncertain terms, explains to Leigh that she is speaking her mother’s words and not her own. Everyone needs a James in his/her life–he an amazing voice of reason.

James is an amazing character on many levels. Hebert has gifted readers with a champion of free thinking while molding a character who is broken and in need of love and faith. As a reader, I was touched on more than one occasion by the descriptions of James’s poor health, his financial struggles, and his staggering lack of self confidence. Hebert certainly gives readers a main character for which they can both cry and cheer.

I was more than impressed with the turn of events in which James becomes a giver of strength and a builder of self-confidence. It is quite a stark difference from the outset of the book wherein James’s feelings are scattered and he’s falling toward depression. Meeting Leigh is just the tip of the iceberg; meeting Meranda completes the change begun by Leigh.

Hebert’s book is an unconventional literary approach to expressing Christianity. Readers do not often find text professing faith in Jesus Christ written in the form of a novel. Each of the stories surrounding James Frost’s life tug at the readers heart and doesn’t stop. James and Leigh are memorable and relatable. Hebert’s in-depth look into James Frost’s transformation is a testament to faith, love, and hope.