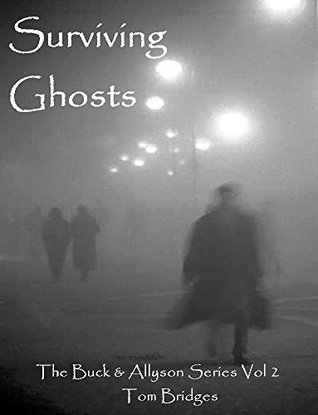 Surviving Ghosts by Tom Bridges continues the adventures of James W. “Buck” Buckler, M.D., and Detective Allyson Mancuso. The novel starts as Buck and Allyson travel to Rome for a medical conference Buck is attending. While exploring the Roman sites and shops, Allyson swears she sees a ghost – her father’s ghost. When it happens again, Buck and Allyson are determined to find the meaning behind the appearances – the “ghost” is actually Allyson’s father in the flesh, who had convincingly died four years earlier. The couple sets out to find answers to their questions – Why did her father fake his death? What are his ties to the mafia? And, what secrets are the government hiding?

In the beginning of the novel, Bridges describes various Roman landmarks and tourist destinations that Buck and Allyson visit. This allows Bridges to set the scene. I believe it is important for readers to visualize where a story takes place, and Bridges’ descriptions allow his readers to do so. The facts and tidbits about the architecture add a level of complexity by incorporating nonfiction descriptions.

The majority of the novel is told using first person from Buck’s point of view. I think choosing this point of view allows Bridges to share the emotions Buck is feeling as well as questions Buck may have. In the other chapters of the book, Bridges uses third person to give information about JB and the government situation.

In using a technique that allows him to switch point of views, Bridges allows the reader to understand the emotions and thoughts from different characters. This helps give a more thorough understanding of the novel.

Surviving Ghosts is built of great ideas! I think they just need to be developed a bit more. Bridges is very good at describing scenes, but I felt that there was often a lot of telling, not showing. There are some very high emotional scenes in the novel, the scenes are setup superbly, but the emotional intensity is muted when we’re told what someone is feeling, instead of being shown.

Bridges has amazing ideas that beg to be explored and developed more. Allyson and Buck’s skills of logic and reasoning are on great display as they uncover a jarring mystery. What you’ll enjoy most about this novel is how well you are transported into the scenes.