← Wrath of the Fallen
Sleepeth Not, the Bastard → 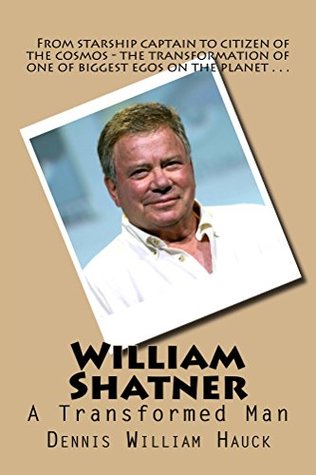 Astonishingly prolific and with unbridled passion, William Shatner stands out as a stunning actor, writer and director with the zeal for mystical life or what some would notate as alien life. The author, Dennis William Hauck, runs an acoustic biography of a partner while working on the film Mysteries of the Gods. Dennis paints the preconceptions of William as an eccentric man who swings like a pendulum from condescending and boring to a nitpicking perfectionist character.

The book is themed with “human evolution” what the author calls “transformation of a man” but focuses on once an influencer of the Hollywood Enterprise to the lost face in the industry.

I have three words for this book; exemplary, fluent and cozy-rosy. Dennis’s artistic nature proves worth it to read the book as he weaves vague facts, whimsical musings and random thoughts into a bedazzled art piece. This book uses scintillating prose that brings out his crafty abilities, which inspire creative concepts in the publishing world.

My first thoughts were that an enticing aspect of William’s expressions and entitlement toward his position as a spokesperson for the alien community is surprising at first. However, a progression through the chapters evokes a mindset of withdrawal from the world. Literally, a journey through his life experience and success stands in the way of belief that such a prominent actor could turn psychic; Dennis does a good of making the reader wander between the two extremes.

Behind the scenes of the Star Trek franchise stood a celebrated modern icon who believed in telepathic experiences and cosmic intelligence, but without proof. Evidenced by the bizarre album The Transformed Man, it becomes easier to note how the author qualifies the metamorphosis of William’s character from one with a fascinating social life and dreamed-of career to a life of strained relationships with fellow actors, ego-centric behavior and unlikeable attention for women.

Dr. Andrija Puharich, a neurologist with keen interest in parapsychology, tends to bend her professional view towards the deep-seated belief that Uri Geller and Gene Roddenberry shared; these were characters who either could equally bring “sense” into extraterrestrial intelligence. For instance, Geller could bend metals or even disintegrate them. I believe this book effectively convinces its target audience to believe in what William stood for.

Dennis makes a closing case by reflecting on the temperament of his protagonist and relates the misconception William had towards his alien friends who, unfortunately, did not “come back” for him. The appreciation of normalcy in human life cannot be underplayed as this autobiography leaves the reader with deep contrasting thoughts of aliens and reality.

William Shatner – A Transformed Man by Dennis William Hauck is an exciting book to read as it probes a celebrity bio with a tale. This book has done more than just impress the publishing market; it has also popped out curious questions that keep the mind wondering what exactly was the thought-process of script writers, actors and directors behind the iconic movie, Star Trek.

← Wrath of the Fallen
Sleepeth Not, the Bastard →