Looters and Grabbers, 54 Years of Corruption and Plunder by the Elite is a detailed account of the many corruption cases throughout Kenya. Why was this an important book for you to write?

It was important for me to write this book to show Kenyans and non-Kenyans how corruption evolved from the day Kenya attained independence in 1963 to 2017, a period of 54 years stretching through four regimes. What this book shows is that corruption and bribery have a long history that goes back well before independence when the country was under British rule. The African rulers, beginning with Jomo Kenyatta, institutionalized it by engaging directly in criminal acts. They grabbed land left behind by the British instead of distributing it to the landless, encouraged relatives and cronies to engage in outright theft of other resources, and created cartels that were immune to prosecution due to their close association with the elite and the ruling class.

What do you think is a common misconception people have about corruption in Kenya?

The common misconception people have is that corruption is a state-sponsored malfeasance that ensures impunity for those in power. There is a saying that a common chicken thief is punished more severely than a person in power who commits a more heinous crime involving billions of dollars. And because corruption and bribery are rampant among the elite, the ordinary folk see no evil in participating in similar criminal acts. Thus, a policeman would do everything to extract bribes from passing motorists, and government clerks will hide files to entice payment, commonly known as “chai” or tea. One recent headline in Kenya said it all that everyone in Kenya is corrupt including grandmothers. And I agree.

The book details contemporary corruption as well and doesn’t leave one feeling as if things will get better. Do you see positive change happening for Kenya with it’s current government or is there many changes that still need to happen?

Like all previous governments, the present regime of Uhuru Kenyatta has made a myriad promises about nailing corruption. In his first 5-year term in office, not more than five government officials were jailed and those were junior officers in the civil service. The big “fish” including those in Uhuru’s own Cabinet and executive office are free despite involvement in mega corruption scandals. In recent weeks, and immediately after the release of my book, Uhuru announced some sweeping measures intended to tackle corruption including what has come to be known as “lifestyle audits” on officers – starting with himself – and changes in the way government tenders are advertised and awarded. It is too early to judge whether these measures would indeed be implemented and those found to have obtained properties illegally jailed. My own view is that that was just a PR stunt to silence corruption critics.

So far, the book has been positively welcomed by the majority of Kenyans who have read it. They say it was timely and informative on the genesis of corruption and on contemporary events. The irony, however, is that some “corrupt” individuals “looted” the book pdf file and began selling the file to a huge group of Whatsapp members in what was a clear violation of copyright. The action was severely criticized by writers who demanded that the looters compensate the author. A few did but that is as far as corruption has reached in Kenya. 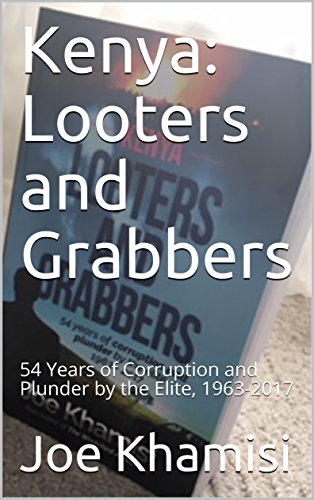 This book is about unbridled corruption, bribery and scandalous financial skullduggery in one of Africa’s most promising countries, Kenya. It is a narrative of money-laundering, mega scandals, and international wheeler-dealing, and describes how Mafia-like lobbyists have been devouring the country’s resources with blatant impunity over four regimes since independence in 1963. It is an important resource for historians, students, researchers, social and political scientists, non-governmental organizations, development and anti-corruption agencies.