← The Watchers: The Blood Dagger: Volume 2
Love’s Story of Why We Are Here → 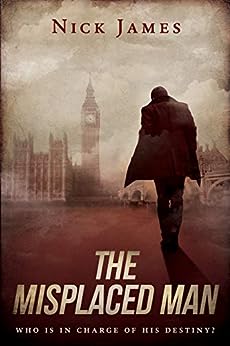 Sam Blades is not your ordinary twenty-something. He has a girlfriend whose abuse he relishes, a job with company whose name could and should be attributed to that of a lingerie label, and an almost absurd fixation with The Matrix. Sam is, on the other hand, a curiosity to more than one person of interest. His job with Shimmering Dreams has made him a target, and poor Sam is none the wiser. Shimmering Dreams capitalizes on the technology that makes it possible to download one’s dreams and store them on mobile devices. Sam, caught in the middle of the “greatest invention its age” and the conspiracy surrounding its misuse, is about to meet face to face with those who want him out of the picture once and for all.

The Misplaced Man by Nick James is a short story/novella centering around Sam Blades, a young man newly-employed and eager to please his beyond demanding girlfriend, Bunny. Nick James is a master at humor, and his main character is his chosen vessel. Not meant entirely as a work of comedy, James provides several laugh-out-loud moments as Sam struggles in his day-to-day life with Bunny. It is rare for me to find the written word comical enough to emit an audible guffaw, but James definitely delivers. Sam’s personality more than makes the book; he is a memorable character in his own right and is well-developed in first-person accounts.

James’s choice to alternate chapters with varying first-person accounts is quite effective. The story, though brief, is packed full of descriptive and revealing scenarios which serve well to differentiate each character. As the reader, I was easily able to discern which character was taking his turn at bat without having to rely on the chapter title–James is just that good at character development.

It is worth noting that The Misplaced Man is a combination of realistic fiction and science fiction but leans heavily on the realistic fiction element. The book is much more about each character’s own personal conflicts than the underlying component of groundbreaking technology. As interesting as the concept of capturing dreams is, it is explored and detailed much less than some science fiction fans will likely expect.

Sam Blades is ruthlessly humorous and has the makings of a fantastic central character for his ensuing series. I recommend Nick James’s short story to anyone looking for a quick science fiction piece with strong characters laced with humor.

← The Watchers: The Blood Dagger: Volume 2
Love’s Story of Why We Are Here →