The Narcissism of Small Differences is a noir detective novel about the guiding influences of memory and the subconscious mind. It’s also a story about how insignificant the differences are between the defenders of law and order and those who live in the world outside of it. And, while it is also a fast-paced police procedural, in the end this is the story of Conor Delaney, a man who can see into the dark.

The story starts with a traumatized, ten-year-old Conor Delaney sitting at the kitchen table of Grandmother Raven, a powerful Ojibwe Midewikwe. Before he leaves her doublewide on the frozen shores of Lake Superior, she holds a ceremony for him, heals his trauma and dubs him Owl Eyes for his ability to see into the dark.

As an adult, he is the head of Delphi Investigations and Research. In this role he ferrets out corporate misdeeds like bank fraud, money laundering and market manipulation. He will ultimately find that these corporate crimes are at the heart of his first murder case; one that the perpetrator of three gruesome murders forces him into. The police team he joins is headed by his good friend, Mel Thorogood, Assistant Police Chief.

Another of his friends is Dr. Phil, a former Jesuit, psychologist and carney barker, who murdered six abusive priests. He is now a permanent resident at the State Hospital for the Criminally Insane. Delaney thinks him to be among the most moral men he knows. Dr. Phil is still a formidable forensic psychologist and profiles the killer as a malignant narcissist who may be a woman. He also lays to rest the notion of a serial killer.

Mackey Stately is the City’s crime boss and a close friend of Delaney’s since childhood. He is pledged to help Delaney with this case. Other unconventional friends, including Henri Bouchard, his Ojibwe brother, help him bring this case to a conclusion. The journey to that goal is grounded in St. Paul, Minnesota, but also involves excursions through Belfast, Kansas City, Tulsa, St. Peter, Minnesota, and St Petersburg, Russia.

But it is the journey into Delaney’s subconscious mind and dreams that bring the investigation to its astonishing conclusion.

Talk About Your Narcissism

The Narcissism of Small Differences follows a man with a special ability to read people who is tasked with solving a peculiar murder case. What was the inspiration for the setup to your story?

I was actually writing what I thought would be a sci-fi short story about craniopagus twins whose streams of consciousness had melded together. They had access to each other’s every thought and could even watch each other’s dreams. But that story fell apart when I realized their unique relationship couldn’t work if they were separated. That’s the moment when a new idea was hatched that became the book. I had a much clearer idea of who Conor was at that point.

It was also around that time that I was given a copy of Seamus Heaney’s, Door Into The Dark, a book of poems that were, of course, quite dark. From it I had an image of the poet as the guardian of the door. It was a short leap from the poet to Conor Delaney.

Conor is an intriguing and well-developed character. What were some driving ideals behind your character’s development?

What a terrifically interesting question. The first ideal that he had to model was that of the anti-pulp fiction private eye. Early in the book, Camille tells him: “[you] have never been a boozer, nor are you a womanizer, a veteran, a former cop or a loner. You don’t own a gun and apparently have never been the target of either criminal or police intimidation.” She goes on listing more of his unconventional traits before ending with, “I have a feeling, Mr. Delaney, that you’ll never make it big as a pulp fiction detective.”

Then, he had to have some qualities that set him apart from other men. These turned out to be his ability to see into the dark and his proficiency with kinesics and hypnosis. Keep in mind that each of these abilities is a two-edged sword. Grandmother Raven warns him that he will not always appreciate his “gift” of seeing into the dark. The same is true of the other two.

Finally, he had to be genuinely empathetic. The opposite of a psychopath. He had to know and feel for people of all kinds, recognizing that everyone is a victim and/or beneficiary of the history and culture of the society within which they came of age.

I also wanted him to be an enigma. For instance, he hypnotizes Kyle Lilly and the book doesn’t tell us if Kyle thinks Delaney is the world’s greatest man because he really believes it of his own free will, or if Delaney used hypnosis to control him.

There’s more, but let’s leave it there or we’ll have to call in the nearest shrink to give us a full-blown psycho-analysis of Conor Delaney. I’d rather leave that task to the academics.

The title names the principal theme I wanted to investigate. I was particularly interested in the ways in which large criminal organizations reflected their legal counterparts values and behaviors. Freud initially coined the phrase to explain why we fight more mercilessly with people who are most like us. That’s why the Irish civil wars prominently featured in the book. Talk about your narcissism of small differences.

But I also wanted to take a good look at the ways in which our subconscious mind, and dreams, influence us. The Ojibwe believe that the world of dreams, visions and the subconscious mind are every bit as real and important as our material world.

Memory and what it really is, or isn’t, is a related and vital matter I wanted to include. Human memory is generally fallible to a fault. Given that one’s sense of self and place in the world, is based on memories, it seems as though we all should be spending more time digging into them.

I also wanted to do something with the idea of the city and used the City of St. Paul as the model. St. Paul actually did have an agreement with gangsters and had officially recognized crime bosses. This was during the 1920 – 30s. Perhaps earlier. I thought it would be interesting to simply stretch that system into the past and future and see what it might look like.

Then there’s the idea of justice. Plato said, “If we should watch a city coming into being in speech… would we also see its justice coming into being, and its injustice?” In other words, would the idea of justice in a city like the book’s St. Paul, be significantly different from what is generally accepted in real American cities today? Just as critical, would they have differing senses of injustice?

It is going to have many of the same characters as Narcissism, but I plan to focus on Gene Swearingen, the attorney. I don’t want to say much more about it because it could, and probably will be, very different from my current plans for it. My fourth and final draft of Narcissism was just completely different from the first one. 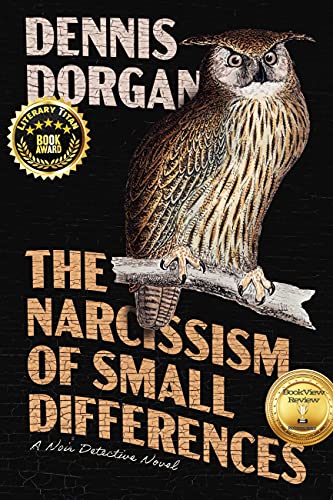