Phantasia follows demigod ex-cop Carissa who is hellbent on clearing her father’s name. What was the inspiration for the setup to this thrilling story?

The single myth that drove this story forward was the one with Alkippe, Ares’ daughter who was raped by Poseidon’s son. Ares retaliated and killed him. Poseidon was obviously unhappy about this and Ares’ became the first god to be tried for murder on the Areopagus. The Areopagus, a hill in Ancient Athens was where judicial business took place. This myth is the over-reaching story arc that spans from book one, right through to book three, which I am writing as we speak. Book one was the kill, book two the trail and book three is the verdict.

Carissa is an intriguing and well developed character. What were some driving ideals behind her character development?

Apart from the basic ideals and psychological needs, I want her to go from ordinary to extraordinary and she still has a bit more learning to do before she hits her full potential. When I sat down to write the series, Carissa was standing in the middle of a labyrinth or mayhem, that said, you are here, and she needed to find her way out of the maze both internally and externally. There is a lot that we can take away from myths and we only need to look at our own life experiences to see how much we grow and change due to life throwing things at us.

I enjoyed the infusion of Greek mythology throughout the book. What kind of research did you undertake to keep things accurate?

I am so pleased to hear that. I loved myth when I started my first book and it seemed natural to me. I have always loved Homer’s representation of the gods because they are so vivid and intervening. I wanted my gods to exude the same presence of Homer’s and I do play a little bit on that whole anger and revenge cycle. In terms of research, I am in the middle of a degree in the Classics and Archaeology. A little late in life but why not? 😃 So, I guess I can say that I have a bit of arsenal up my sleeve. 😊

This is book two in the Phi Athanatoi series. What can readers expect from book three?

Spoiler Alert: I keep saying, and apologies for being so cliché, it’s going to be bigger than Ben-Hur. You can expect more craziness from Carissa’s family. A character may not survive. The gods are as intervening as ever, and Xen and Carissa may go through a small learning curve before they get their Big Fat Greek Wedding. 😃 Definitely some fun moments to deal with the darker elements. 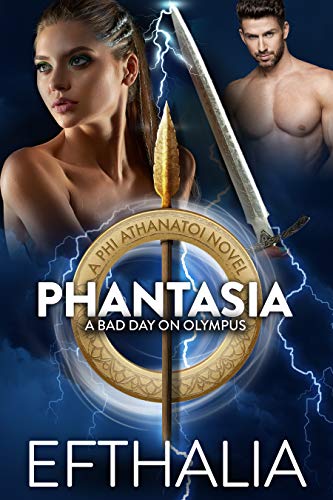