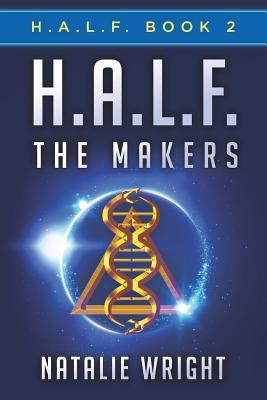 H.A.L.F.: The Makers written by the fantastic, and award winning author, Natalie Wright starts off strong and striking with amazingly descriptive writing. The story follows two groups of protagonists, Erika, Ian, Dr. Randell and Tex taken via the Grays, an alien race who hosted a massive aura of mystery. Tex is being held separate from the others. The group believes themselves to be on an alien ship. However, Tex has information that could show otherwise. The aliens rejected Jack and left him on earth to the group’s confusion, while Commander Sturgis, starting off with a messy confrontation with her superior, holds knowledge of what’s to come.

Every character has a defined purpose and is finely crafted; each plays their role, with unique perspectives and interesting points of view. The writing is incredibly descriptive and sets the scene for each character. However, there is a lot of switching back and forth between different characters that made the story hard to keep in perspective at times.

On the other hand, the way the author meticulously develops the mystery throughout the story, and how carefully crafted each character is, kept be glued to the pages. They were like finely ticking cogs working towards the bigger picture. The opening segment was one of the most captivating pieces I’ve read in a long time, the detailed description of Erika inside the alien ship was fascinating and had me hooked from the very first page. Most characters are written in a very personal way that make them feel real and make it easy to understand their fears, pride, and personality.

The pacing of the story helped drive the mystery and allowed time for characters to fully develop.

H.A.L.F The Makers has a fantastic story, filled to cover to cover with excellent description and brilliant creative freedom. Personally, I knew I was going to finish the book from cover to cover the moment I read the first chapter. A short prologue would have been a welcome addition for new readers. But none the less, pure passion and creativity eased me into the story, and before I knew it, I was heavily invested.

There Really Are Human-Alien Hybrids?

H.A.L.F. tells the story of H.A.L.F 9, a Human-Alien Life Form that escapes from the military facility where he was created. What was your inspiration for this imaginative and thrilling novel?

The original idea and plot for this story came to me one day as I was driving in my hometown of Tucson, Arizona, listening to a techno-rap song called “Cowboys and Aliens”. What can I say – it was a hot day in the desert! I’ve long been fascinated by the remote area in southern Arizona, the borderlands between Mexico and the U.S. There’s a military testing range out there and not much else. That song on that day got me thinking about how alien conspiracy theorists talk about a secret underground base. And I thought what if such a base is under the missile testing range? And what if there really are human-alien hybrids? And why would a shadow government want to create such a being? The series has been great fun for me, a huge X-Files, Twilight Zone and Star Trek fan. Fun to create my own alien worlds and adventures!

H.A.L.F. 9 forms a bond with other teens that he comes across and their relationships are dynamic and deep as well. What themes did you try to capture when you were creating the relationships the characters had?

When I write a first draft, I generally don’t think about themes. I also don’t spend time outlining relationships before I write. I try my best to let the characters “speak” and for the relationships to evolve organically.

But once the first draft is written, with the assistance of my content editor, I fine tune. In The Deep Beneath, I had not originally intended for H.A.L.F. 9 to become romantically interested in Erika. But he’s a 17 year old guy who’s never been around girls his own age! Of course he’s interested in her!

As for the three human teens, I spent a lot of pre-first draft planning time creating a relationship backstory for them. On the advice of an early editor, I decided to have Erika and Jack having problems in their boyfriend/girlfriend relationship right off the bat. That’s not a typical starting point in a YA book and I think it was good advice. Over the three books, readers get to see complex relationships play out. And I think that’s more like what life is really like. Even with people we love deeply, we don’t always get along. There are ups and downs. But will we stick with someone through thick and thin? Or bail on them when the going gets tough?

Ian and Erika are best friends. Like many best friends in coming of age stories, their relationship is tested by the difficult circumstances they’re thrust into. The circumstances of the story force them to journey beyond their small town and into the wider world. And oh what a world they step into! They each are confronted with moral dilemmas and the choices they make affects their relationship.

What emerges is a story that over the 3-book series is about loyalty, trust, and having each other’s backs. Not only do we see this in how the three older teens deal with each other, but also through how Erika is teaching H.A.L.F. 9 about living in the human world.

As I’m just finishing up revisions on the third and final book in the series, ORIGINS, I’m going to miss these characters! I’ve enjoyed writing their relationships and watching them grow.

H.A.L.F 9 has telekinetic and telepathic powers which make him a valuable asset to the government. These powers are used in unique and interesting ways. How did you handle the use of these powers in the novel where they were believable yet useful?

I was inspired to give H.A.L.F. 9 the powers that he has from my research into a real top secret military project called Project Stargate. It was started in the 1970’s and the purpose was to research the potential of “psychic warfare.” This was during the cold war and they were seeking to create a “remote viewing” spy network but there was also this idea that enemies could potentially be taken out from thousands of miles away using only the mind.

Of course they didn’t produce much in the way of results. The funding dried up and the program ended (allegedly ;-).

Giving the hybrid being these abilities was like creating superpowers or a magic system. So I had to think of its limits. That led to a rather unique problem for the hybrid beings that acts as a limit on their “magic” and is, I think, one of the more unique aspects of the series.

H.A.L.F.: ORIGINS (H.A.L.F. 3) will be available August 24, 2017! I’m so excited for it! It has been a super difficult book to write due to all the threads that spread out in book 2. But I think that readers will find the wrap up exciting and satisfying – and all questions will be answered!

H.A.L.F. 9 has taken his first breath of desert air and his first steps in the human world. Created to be a weapon, he proved too powerful for his makers and has lived a sedated life hidden from humans. But H.A.L.F. 9 has escaped the underground lab he called home, and the sedation has worn off. He has never been more alive. More powerful. Or more deadly.

Erika Holt longs to ride her motorcycle east until pavement meets shore. She bides her time until graduation when she’ll say adios to the trailer she shares with her alcoholic mother and memories of her dead father. But a typical night in the desert with friends thrusts Erika into a situation more dangerous than she ever imagined.

Circumstances push the two together, and each must make a fateful choice. Will Erika help H.A.L.F. 9 despite her “don’t get involved” rule? And will H.A.L.F. 9 let Erika live even though he was trained to kill?

The two may need to forget their rules and training and if either is to survive the dangers of the deep beneath them.