To See Shades of Gray

Into Oblivion follows a woman who follows a traveling circus but finds that the circus harbors dark secrets. What was the inspiration for the setup to your story?

I was inspired by a series I read when I was younger about a traveling freak show. I wanted to put my own spin on the story of a traveling performing troupe. I finally came up with the idea of Roadside Paradise when I thought about the unsavory image most traveling circuses have in the modern day and thought decided to create a traveling circus dedicated to righting wrongs.

Athena is an interesting and well developed character. What were some driving ideals behind your character’s development?

I wanted to be sure that Athena was very no-nonsense and set in her beliefs about the world because I wanted her to struggle with the magical aspects she comes across in Roadside Paradise. I think her struggle to see shades of gray in what she sees as a very black and white world is one of the main points of the series.

The most important theme I wanted to explore was justice. Roadside Paradise and V in particular punish wrongs the patrons of the circus commit. But he cannot do anything more or less than the crime he is punishing. This meant I had to take a hard look at what punishment would be considered too much for the crime.

This is book one in your Roadside Paradise series. What can readers expect in book two?

Books 2-5 are already available for purchase. Book 6 will be released in Fall 2021. 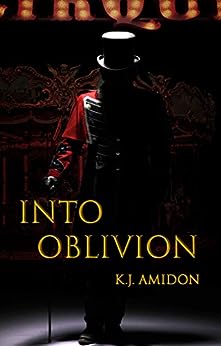 The Roadside Paradise traveling circus appeared as Athena’s savior, picking her up at a truck stop and encouraging her to join the show, accepting her almost like family. Athena, however, had, to a degree, sought out Roadside Paradise, hoping that the circus would provide answers to certain events of her past and help her find her sister. It shocked her to learn that the owner, known only as V, knew why she was there. It shocked her even more to learn about the incredible happenings within the show. When V tells her that he can help find her sister, Athena must learn to put aside her doubts and suspicions and allow it to happen.

Into Oblivion by K.J. Amidon is the first of the three part Roadside Paradise series and introduces us to Athena, V, Doc, and the rest of the troupe. With Athena as the initial focus, the plot quickly establishes her as a tough, no nonsense kind of person, hinting strongly at her troubled past without revealing everything too quickly. With the introduction of the circus and its many personalities however, Athena becomes more complicated, as she navigates the waters and tries to decide how much to reveal and to whom. She is quickly forced to admit that she has an ulterior motive for being there when she’s faced with Doc and V who legitimately have supernatural abilities. Almost as soon as they’re introduced, it becomes clear that the Roadside Paradise isn’t “just” a circus. Into Oblivion is an intricately and well crafted story about one person’s personal mission amid worldwide secret societies. It escalates quickly… and is a fun ride the entire time.

Into Oblivion has a lot going on and at times it feels like it’s telling two different and distinct stories. But as it twists and turns and new reveals are made, Athena’s story slowly becomes more intertwined with that of the circus, and V specifically. Because it’s part of a series, there are few resolutions by the end, but by that point you’re invested- not just in learning if the characters reach their goals, but also in finding out more about V and his history. Athena is the main character, but V is also an equally intriguing character.

I was frustrated initially with what seemed to be an overly busy storyline, I was nonetheless hooked very early on and was excited to see how it all started to come together. I hope the next two parts of the book tie everything up well and I’ll so we can see who comes out on top!

Into Oblivion is a complex urban fantasy novel infused with captivating paranormal elements that make this a must-read for any reader looking for a book that has an alluring mystery driving it.