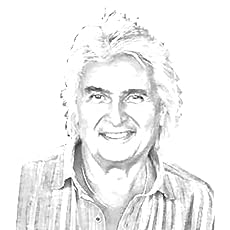 Rogue Genes follows Tommy who is dealing with the trauma of the military while seeking revenge for the death of his mother. What was the inspiration for the setup to this thrilling novel?

I woke one morning from a disturbing dream, and told my wife I was going to write a novel. The fact that the dream had no bearing on the eventual story line didn’t matter, at least it got the ball rolling. For the next two years I literally lived two lives, completely involved with every emotion of the characters I had created. A real labor of love.

I always knew that one day I would write a book or two, and for that reason I was never an avid reader. I simply didn’t want to have someone else’s story buried in my subconscious, to one day be revealed unintentionally, as my own. Originality was the key. To be honest, I wasn’t aware of the enormity of the task (100000 words with two fingers) until I had committed myself, but by then it was tool late. I was hooked. The truth is I had absolutely no idea where the story was going from one day to the next, and this continued pretty well for 2 years. I think it would be accurate to say the book wrote me. I put a lot of thought into the characters, hoping to bring them to life,and from the feedback I have received I seem to have achieved that. Hopefully, one day the book might be a movie.

I guess the story does seem a little unbelievable at times, and I tried to counter that by making it obvious in the characters conversations that “you are never going to believe this, are you kidding me” or “unbelievable, you are going to have to write a book about this.” The funny thing is, you would probably never believe the number of those bizarre coincidences, or similar events, that I have actually encountered personally or indirectly in my life!

Well I would love to do a sequel, but self publishing is no easy task, I guess the sales will dictate that.

From the moment nurse Marge McConichee laid eyes on the one-day old baby boy, abandoned at the hospital where she worked, she knew he was meant to be hers. Marge and her husband Joe had been hoping to adopt a child, and, after pulling a few strings, the baby was put in their care. They named him Tommy in honour of Joe’s father. Following Joe’s untimely death, Marge was forced to raise the rebellious Tommy on her own. A couple of stints in a boy’s detention centre are followed by a term in the army, where after graduating to the Special Service, Tommy finally returns home a somewhat damaged and reluctant hero. Eventually meeting the girl of his dreams, Tommy’s life is then shattered by the death of his beloved Marge; an event that sets him on a path to find his biological mother. His journey is littered with bizarre coincidences, and acts of evil, which leave Tommy determined to avenge the sins of the past. Some families have a member with a Rogue Gene, but in this family, it was part of their DNA.

Rogue Genes, by Jardine Henry Hart tells the tale of Tommy McConachie. Abandoned at birth as a one day old baby at the hospital, he was adopted by nurse Marge and her husband Joe. After her husband died suddenly Marge found herself raising Tommy all alone. As he became a teenager he began to rebel and after spending time in a boy’s detention center he joined the army. After serving time in the Special Service Tommy returned home, but his time in the army had left its impact. When his beloved mother passes away he is intent on seeking revenge.

This book is filled with all things a suspense novel should have; action, suspense, anxiety, surprise, anticipation and of course plot twists.

Rogue Genes has quite a number of characters. The story begins and evolves around Tommy, his mother – Ticker, and his two best friends, Sparrow and BB.  The characters are well developed and the relationships are realistic and believable. Soon, other characters are introduced, all with their own unique and interesting stories.

Tommy is portrayed as a strong male character and the reader gets small insights into his past life in the military and the violence he encountered, and hints of the violence in his future. He is an intense and deeply loyal man who is searching for a woman to love and be loved by.

The introduction of such a woman adds interest and direction to the story. Her character is the polar opposite to Tommy and provides a clever contrast. She has had a stable, if not sheltered, childhood. I felt that some of the bizarre coincidences and twists were a little far-fetched. Although these bizarre coincidences are part of the story, at times the intertwining of the relationships becomes almost unbelievable.

Rogue Genes is still a deeply provocative and gripping read. Like all good thrillers there is plenty of action, and the reader is constantly kept guessing. It is ultimately a story of self discovery, and of course, a journey to see if good will eventually overcome evil.