The Gift of the Seer follows Katie and Hectors journey across the continent as they learn more about each others ways. What was the inspiration for the setup to this series?

I had a fairly bad childhood, but when I was seventeen, I became captivated by Native American history, and I have never looked back. I have spent my life studying Indian history, cultures, and stories, and I even went on to get a Masters Degree in English with a specialty in Native American literature. After having read dozens and dozens of captivity stories from the 17th, 18th, & 19th centuries, I wanted to write a book to share what I learned with people who have neither the time nor energy to dig through all those old documents.

Katie and Hector are dynamic characters with an interesting relationship. What were some driving ideals behind their characters?

I see Katie and Hector as metaphorical representatives of their people. They are endlessly intrigued by one another, even as they also pose a very serious threat to each other. Because they formed a physical bond before they understood much about each other’s worlds, they created a conflict that takes them decades to resolve–which is, oddly enough, equally true of almost all young lovers who get married and have children! So one of the basic premises of the story is that relationships are hard, whether those relationships are between individuals or nations, and finding common ground is an ongoing challenge. But, oh!–meeting that challenge is definitely worth the effort!

I enjoyed the nuanced world views and philosophies in the book. What were some themes you wanted to explore in this book?

I was working on an intriguing manuscript three years ago, but I gave it up when I could not see how the story ended. Then my mother died, and I suddenly understood exactly how that story ended. Now that I have finally gotten The Gift of the Seer into the hands of the public, I am returning to my unfinished manuscript, and I hope to have something readable by mid-2020. 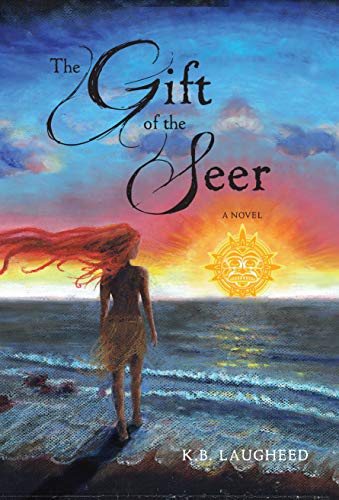 Katie O’Toole’s epic adventure began in The Spirit Keeper (Plume 2013) when she was rescued from a 1747 frontier massacre in Pennsylvania only to find herself chosen as the “Spirit Keeper” of a dying Indian Seer. She hesitated to accept this mysterious obligation until she fell in love with the Seer’s bodyguard, an Indian man she called Hector.

In The Gift of the Seer, Katie and Hector continue their journey across the continent, but the more Katie learns about the peculiar ways of her husband’s people, the more she dreads arriving at their destination. Will anyone believe she is the Spirit Keeper she pretends to be? Equally troubling, Katie knows the Seer expected her to prove his Vision—a Vision which foretold of infinite Invaders coming to his world—but to prove this prophecy, she must give his people the great Gift he also predicted. The only problem is that Katie has no Gift to give.

Years pass as she desperately searches for a way to fulfill her promise to the dead Seer, but when his former rival threatens to expose her as a fraud, Katie finally understands that her life and the lives of all the people in her new world hang in the balance. That’s when she knows she must give a Gift—she must—before it is too late.

The Gift of the Seer

When you tire of the overload of digital and technology tools within our 2019 era, K.B. Laugheed’s The Gift of the Seer will expedite time travel back with you, and this author will have you writing with a feathered quill by the end of this literary journey! Put on your cultural anthropologist boots and allow this novel to cleverly weave historical yet fantastical plot elements, interestingly complex characters, and a rugged setting that will definitely transport and immerse readers. You will face cultural nuances, norms, spiritual beliefs, worldviews, philosophies, goals, life lessons, conflicts, natural connections, romances, and myriads of adventures via an Indian perspective. Our protagonist, Katie, provides uncensored reflections and stories spanning from the years 1748-1778. Yet Katie, the book’s protagonist, is not the docile, silent, subjugated, stereotypical, domesticated wife and mother that many heroines from her time era typically portray. Instead, she is a literary and cultural badass-think Katniss from The Hunger Games -but Katie encompasses more maturity, carnal pleasures, and complexities as a woman struggling to survive among different cultures, determined to sustain her love for her husband against all odds, and abandoning the feelings of guilt and condemnation based on her feeling that she’s living a big lie!

In short, adventures, dangers, thrills, and chills will bombard you on every page. Yet instead of feeling defeated and exhausted, you will experience the triumphs and evolution, right alongside Katie, as if you were a passenger in her canoe! The book is brilliant in terms of its vivid, sensory details that paint a no-nonsense picture of life during this era. The characters also conjure feelings of fables and folk tales via the author’s unique, authentic style. At times, I noticed hints of magical realism, which further add pizazz to this riveting book. While there are so many positive qualities about this book, especially the way in which the author develops her vast array of characters and executes her dramatic dialogue, all with cultural relevance and sensitivity, I was a bit overwhelmed with the plethora of social, historical, political, cultural, marital problems and themes that she tries to address all at once. At times it was slightly too ambitious for me to keep track of all the family members, neighbors, friends, and foes. Although they are important, especially to comprehend the larger scope of the historical fiction milieu, some of the symbols were slightly perplexing and some plot events were mentioned but not fully explained.

All in all, because readers can sense the imminent danger on every page, as evident from the great use of foreshadowing and cautionary notes to build suspense throughout the text, as in “til the ocean wave of Colonists comes crashing down upon us—then we will see which of us is right,” We not only learn cultural and historical information through characters with real vulnerability and authenticity, but we also find solace in our own journeys about how to fit into this world and all its challenges! We obtain a true sense of empowerment within this challenging piece of art. Try this time travelling and cultural anthropological plight by K.B. Laugheed in The Gift of the Seer!