High School Life is a Tornado

Life Sliding follows Gavin, the popular kid in school, as he is sent to camp Lift Me Up to help special needs children. What served as your inspiration while you were writing this book?

Like myself, lots of teenagers experience alienation in their high school life, which is a challenging time of self discovery while navigating one’s way to adulthood. My inspiration is those in the trenches now and those who survived those years. Within the walls of education, there is so much more learning going on than just algebra. At times, high school life is a tornado. I believe most adults have forgotten what was at times, a nightmare. Trying to understand my experience as an outsider, I explored the story from the popular kid’s prospective, peeling back the layers to discover who he is underneath his vamped up exterior. Much later after my school years, I became friends with someone who was in the “in crowd” at my school. I discovered this person was not who I had imagined they were. As we find with Gavin, one never really knows what’s going on inside someone, the real person. How do people end up where they are positioned on the social ladder? Jacob expresses his thoughts on the matter to Gavin in a deep conversation at camp; Jacob understands.

What I found most interesting about Gavin was the slow emotional change he undergoes throughout the novel. What were some morals you wanted to capture while writing his character?

We live in a society that is highly judgmental and most are quick to come to a conclusion about someone without ever getting to know them. You can’t judge a book by its cover and you will certainly fall short trying to make a summation of someone by their looks, they way they dress or zip code they come from. If anything, we need more understanding.

Was there anything from your own life, in high school, that you put into this novel?

I was an outsider who experienced some of the issues mentioned in the story and simply observed others going through their own trials. Between algebra and biology, it’s all there – self-harm, bullying, relationships, sexuality, eating disorders, angst and so on, but mostly life happening.

My ya novel Always Here was just released in September 2017. I have an adult fiction novel tentatively titled Kudzu, which is in editing with no set release date and I am writing a New Adult novel titled Somebody Else. 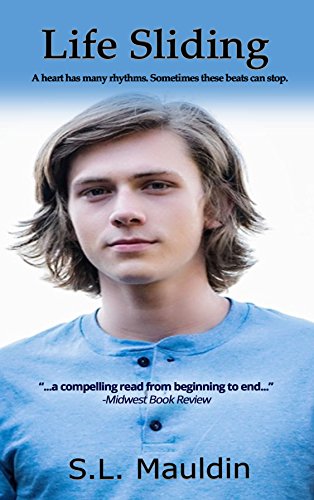 As Gavin’s junior year comes to a close, he faces an inner conflict with his status as the most popular kid in high school. It’s not lost on his father, who sensed for some time that his overly indulged son needs redirection. Making matters worse for Gavin, his dad sends him away for the summer to assist at a camp for children with special needs.

Arriving at camp Life Me Up, Gavin is suddenly forced to dabble in a world less familiar. After his first uncomfortable encounter with a strange girl with multi-colored fingernails, who refuses to waiver his arrogant behavior, Gavin comes face to face with a person from the past, which leaves him uneasy.

Inevitably, three people clash and collide, but when tragedy strikes, they come to an understanding regarding their differences. Becoming a young adult, Gavin faces a summer of harsh lessons in reality. Once he crosses the bridge from a self-inflicted prison to the road to freedom, Gavin and his new friends implement a strategy to stir up the social order when they return to school in the fall.

Because of one jaded person jumping to conclusions, the plan backfires. Will they be able to survive the fallout of what they’ve put into motion?

High school, a time for learning who you are, what your values are, and what matters in life. Gavin is the popular, most liked guy in his school. He is the trend setter and his hand-picked friends are at the top of the social pecking order. When they start planning their last summer bash before becoming seniors; he is quickly ripped out of his comfort zone when his dad decides he needs to spend his last vacation giving back to the community. Gavin is going to spend his summer working as a volunteer for camp Lift Me Up, it is a camp for kids with life threatening illnesses, a chance for them to feel normal. Here Gavin reconnects with an old friend Jacob, and they befriend Marissa, a girl with a lot of emotional baggage. Together the three of them bond and look to make their senior year one to remember not just for them, but for the whole school.

Gavin is your typical self-absorbed teenager, he’s on the football team, one of the popular kids, and comes from a family of money. Everyone knew that kid in high school, if you were not part of that crowd chances are you despised him, if you were in the crowd you looked up to him, or at least followed so not to lose your standing. When Jacob stopped following the cool crowd Gavin abandoned him. He never looked into why his best friend suddenly changed over the course of a summer. Gavin soon learned with his service at Lift Me Up what brought about the change in Jacob. Following the back and forth between Gavin and Jacob is exciting, you are never quite sure what their feelings for each other really are. Seeing Gavin grow is emotional, he learns that there is a lot more to the world than his little bubble, and he learns to really care for other people. This awakening is uplifting, it gives you hope that society is not doomed.

One of the most predominate themes in this novel is that love has no boundaries or appearances. High school romances are often flirty and based on who is who and what social class you fall into. While this novel starts out following those trends and is easily relatable to readers, it soon twists and becomes so much more. The story of Caleb, the boy with leukemia, that latches onto a resentful Gavin is a catalyst for the change in Gavin. His memory is a constant reminder of how fragile life is and that you can’t live your life trying to live up to everyone else’s standards. I was really touched by Caleb and how his short time impacted so many lives. It is a reminder that it doesn’t matter how long we are here on earth, but what we do with the time we are given. Caleb melted the heart of Gavin and reminded him there is more to life than his little social circle. Gavin and Jacob’s relationship is touching and so fluid you just can’t help but want to see how life goes for them both. Everyone should have a friendship like that in life, someone that loves you unconditionally and is there for you no questions ask. Life Sliding by S.L. Mauldin is a touching novel, thought provoking and full of compassion and hope.