Sanctum Is Coming For You Once Again!

Sanctum: Forests of Avalon follows a knight and his companion on a quest to save the dying world of Avalon. What was the inspiration for the setup to your story?

In our first book when we had Isolde come to Setesh, and she was a stranger in a strange land. For the readers – we wanted them to experience the “newness” of the world through her eyes. With Forest of Avalon – we wanted to create context for the audience to understand what kind of world she came from and how VASTLY different it was to Setesh in both culture & environment. Both CS & I are fans of Arthurian Fantasy so the concept of the land dying and being poisoned at its heart was our nod to those stories of old, as well as giving us an opportunity to put a spin on it.

How long did it take you to imagine, draft, and write the world your characters live in?

For Avalon – CS began in November of 2020, but then holidays and the world going politically crazy – we really started the engines again in early 2021 and finished officially in September/October. So basically 10 months to create new characters/creatures, personalities, as well as give the land of Avalon substance.

What character did you enjoy writing for? Was there one that was more challenging to write for?

While I can’t answer for CS – personally, it isn’t so much as a specific character – but the back and forth verbal sparring between the main & side characters. My goal is to always make sure that the characters you meet are more than two-dimensional cameos. I want them to seem like they have lives and responsibilities beyond their interaction with the main characters.

While both CS & I write for both Isolde & Tulok – the most challenging thing is ensuring that there isn’t any character bleed. If I write the actions of one character one way – I want to be sure that the attitudes and actions are consistent when I write. This way, when CS takes up the pen for her sessions – she can look back at that consistency, and know where she can go with her take. Since we don’t occupy the same living space, and have our own lives – we end up sending messages and DMs to one another asking why the other did this or complimenting the direction that was taken. Writing solo is one thing – but writing as a partnership is challenging but extremely satisfying when we’re in tune.

We are currently working on the third book of the series (to be named) and ideally we are also aiming at completing it by the end of the year. So come December – watch out! Sanctum is coming for you once again! 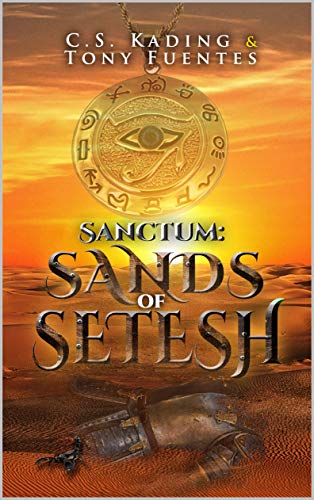