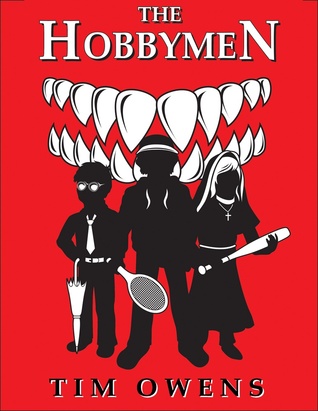 Fun. That’s what Tim Owens brings to the table with his 2014 novel, The Hobbymen. It’s just fun. Ghouls, goblins, monsters. Banter. Sarcasm. Interesting settings and a fast pace. While you read, you can tell that Owens had a great time writing the novel and that excitement is transferred to us as we flip each page.

The book starts with Liliana, a down-on-her-luck young nun who’s caught stealing an old loaf of bread in a little town in Mexico and then thrown in a dusty, dark jail. As she sits in the dark basement, wondering if this dilapidated prison is even legitimate and awaiting her outcome, she hears the running of two young men being chased by something she’s never seen before – a scaly monster with fangs and a vicious demeanor. She watches as a fight ensues. After the two boys knock out the strange beast, they take pity on her and let her out of her cell.

We find that the two men, Geoff and ‘Book’, are monster hunters, tracking down the true origins of mythical creatures from legends, stories, and myths. Geoff and Book are friends, though very different in personality and are constantly barraging each other with good-natured sarcasm and other scathing remarks. While originally the boys were simply going to return Liliana to her convent, they quickly become a team. Working out of their shabby van, they go on all sorts of adventures – following leads for any gruesome, dangerous, or fascinating creature. Unfortunately for them, other more nefarious characters have caught wind of these adventures and they have their own vested interests in the creatures that they search for. This all leads to an exciting conclusion involving a huge rock-like monster, severed hands, and incantations.

With The Hobbymen Tim Owens has created a fun read. The dialogue is entertaining. It flies with sarcasm, humor, and references to other fantasy stories like Lord of the Rings and the classic 90s flick Tremors. The storyline is somewhat simple, but the characters and creatures continually pull you in to read more. We watch as Liliana changes from a young runaway with no real plan, to a strong, determined woman who can fight just as well as the boys. And as we flip through each page, we find that like Liliana, Geoff and Book have their own secrets and past hardships which drive them on their quests. And surely there’s chupacabras and voodoo, but it’s really a book about a girl who felt alone due to the mistakes she’d made and then finds a home, a place where she belongs, in an unexpected place and with very unexpected people.

I give The Hobbymen 4 out of 5 stars simply because it’s just good old fashioned fun. For the monster-lovers and supernatural-junkies, I would recommend this quick and light book. Because of the easy writing style and the young characters, the book lends itself well to a young adult audience, though parts might be a little intense for the younger end of that demographic (I mentioned a severed hand right?), but in the end really anyone would enjoy this. Friendship. Adventure. Voodoo. What more could you want in a book?