← Taking Zombies Back to Their Voodoo Origin
The Everlasting Fight →

I Dove Into This Dystopian World

25 Perfect Days Plus 5 More chronicles the path into a hellish future of food shortages, contaminated water, sweeping incarceration, radical religion, and extreme population control. What was the spark that made you want to write a book with such dystopian themes?

The idea for 25 Perfect Days came about after my wife suggested that I connect “5 Minutes Alone” and “Four Percent,” two short stories I’d been trying to publish. Once I saw the possibilities, I dove into this dystopian world. I had been spending a lot of time researching police brutality, government conspiracies, and the abuse of human rights, so this was my chance to work through the anger I had toward these injustices.

There is a large cast of characters in this novel. What was your favorite character to write for and why?

Tough question, but I have to go with Michael Adams, the father in “Five Minutes Alone.” I reworked this story several times, even after it’d been published, because my perspective changed after I became a father. I forced this character to make a very difficult decision and discovered a lot about him in the process.

The novel is really a collection of short stories, much like the novel World War Z. Why did you choose this format to tell the story?

I began my writing career with short stories and absolutely love being able to tell a story in just a matter of pages. The short story format however comes with many limitations, especially when protagonists routinely die and there are hard-to-find connections between stories. I intended each of the stories to be capable of standing alone, but also add something to the overall collection. One of my favorite aspects of this format is that I could pop right back into it and expand it to showcase a new character or an unjust law as I did with 5 More Perfect Days (included in the bonus edition.)

In 25 Perfect Days Plus 5 More you tackle a lot of extreme social viewpoints. Do you think there is anything today that you once thought only fiction, but has become reality?

I’m afraid I haven’t been all that creative in imagining some of these desperate situations, as I’ve simply exaggerated what is already taking place in different parts of the world. Outlawing homosexuality, the use of indentured servants, our dependency on technology, the corruption and oppressive potential of both religion and government. The biggest compliment I’ve been given in reviews is that 25 has made readers consider their rights and how important they are to hold onto.

Early 2017 I will be releasing Unlocking the Cage which documents my four-year journey where I traveled to 25 states and over 100 gyms to interview 400 MMA fighters. Summer will mark my return to fiction with Try Not to Die: In Brightside and Ain’t No Messiah. 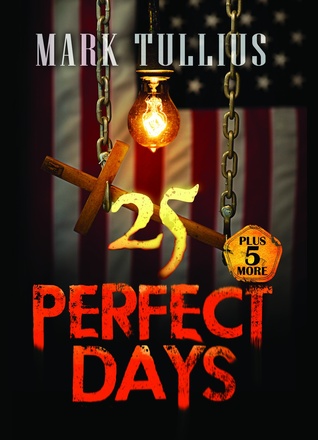 25 Perfect Days, named one of IndieReader’s Best Indie Books for 2013, just got better with the addition of 5 More Perfect Days. A totalitarian state doesn’t just happen overnight. It’s a slow, dangerous slide. 25 Perfect Days Plus 5 More chronicles the path into a hellish future of food shortages, contaminated water, sweeping incarceration, an ultra-radical religion, and the extreme measures taken to reduce the population. Through twenty-five interlinked stories, each written from a different character’s point of view, 25 Perfect Days captures the sacrifice, courage, and love needed to survive and eventually overcome this dystopian nightmare.

← Taking Zombies Back to Their Voodoo Origin
The Everlasting Fight →