← A Metaphor for a Butt Whipping
Knowing God Book Trailer → 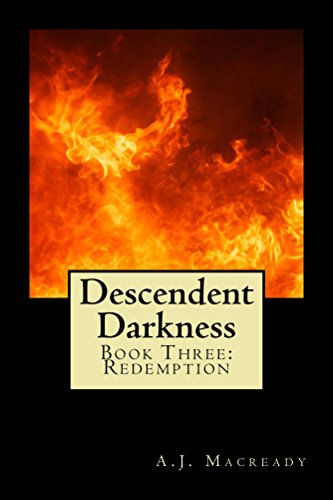 A.J. Macready’s Redemption, book three in the Descendant Darkness series, details both the rise and fall of a line of vampires dominating the mountains of Virginia. Deemed “America’s Transylvania,” Clarke’s Summit is home to a plague of sorts dating back to the 1700’s and a rash of murders in 1982. Sheriff Stan Pryor finds himself facing a terrifying night of death and retribution in Clarke’s Summit in 2003 when the town is again host to the vile and nefarious acts of Lydia, a vampire of old seeking vengeance on the three remaining members of the town’s founders. Richard Gaston, Tom Campbell, and Father Ryan Bennett are left to face Lydia’s wrath.

Macready’s Redemption is as filled with action as it is brimming with rich characters. From beginning to end, readers are left breathless with the anticipation of Lydia’s next move. There are few, if any, breaks between chaotic and harrowing scenes. The energy is high throughout the book, and the meetings between the citizens of the cursed Clarke’s Summit township build to an almost exhausting level.

As a first-time reader of Macready’s Descendant Darkness, I wasn’t sure who to peg as the main character right out of the gate. The longer I read, the more I realized that Macready’s main character is the vampire storyline in and of itself. Though each of the characters is memorable and comes with a strong backstory, no one character stands out as the focus of the storyline. Sheriff Pryor helps to set up the premise of book three while Richard Gaston, his son Mike, and Tom Campbell (the vampire hunters, as it were) work as a cohesive unit to battle Lydia, her heinous attacks, and life-altering mind games. Even Lydia, a vivid protagonist, can’t be pointed out as the book’s sole focus. I found this particular choice in the writing to be quite appealing.

I have always been intrigued by the notion that some aspects of truth are embedded in folklore. That being said, one of my favorite elements in Macready’s writing was the inclusion of excerpts from local newspapers describing historic events and the details surrounding what the town deems the “Clarke’s Summit Blood Cult.” The lengths to which Macready has gone to give his vampire tale credibility are impressive. I found myself as absorbed in the passages from the Shenandoah Observer as I was in the lengthy and involved action sequences.

One of the most striking facets of Macready’s vampires is their ability to manipulate the minds of their victims. Throughout the book, Lydia is able to inject her own words into their thoughts and, essentially, control their actions. These episodes are peppered throughout the plot, and each one brings a chill.

Any fan of vampire stories will find this book appealing and engaging. The author expertly incorporates the backstories of Lydia and the vampire-hunting descendants into this third installment. With side stories paralleling those of the book’s main cast of characters, Macready provides mystery, suspense, and action in one neat package.

← A Metaphor for a Butt Whipping
Knowing God Book Trailer →