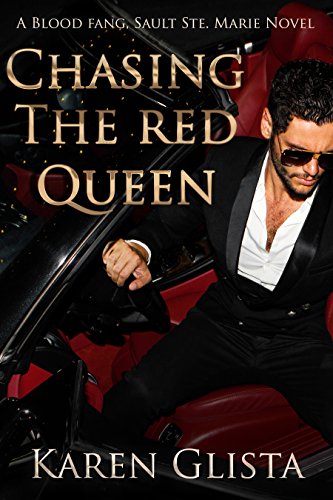 Chasing the Red Queen opens with the recently turned 18-year-old Donja, a self-proclaimed goth who is uprooted from the normalcy of teenage life. Her mother remarries, giving Donja a new home, a new father and a new stepsister. What starts out as an angsty teens tribulations quickly shifts to darker elements as violent murders begin to hit close to home. New characters emerge, friendships are made, and lovers unite exposing a history of supernatural elements and family secrets Donja never expected.

Karen Glista offers an urban fantasy with a dash of crime, horror and steamy romance all set to the backdrop of vampire lore. A perfect weekend read for those favoring the genre. The author also provides new components to these otherwise over told stories with well researched historical content and fleshed out explanations for the mystical aspects. The mix of first nation cultural and detailed locational history give a fresh twist to this vampire romance which kept me intrigued to the very end.

I found Donja to be likable as the main character. Although the constant reminder of her gothic reputation is repeated one too many times, otherwise her emotional response and reactions are believable throughout the story. I adored the character development between Donja and her stepsister Makayla, from beginning to end they share a bond that unites them through a roller-coaster of emotional events.

Unlike Donja, where she shines in the first half of the book, her counterpart Torin unfolds as the main player towards the end of the book. Once Torin takes center stage I found myself more invested in his story and the account of his mysterious past as well as that of his kind.

I felt that the timeline was a little vague; how much time did everything take, was it days, hours, weeks? I also felt that their were quick leaps in character changes (ie. Frankie, I didn’t know what was happening to him until it was already over). These are the only minor things holding the book back.

However, the story surprised me with well thought out action scenes and gritty dialog. While some secondary characters faded into the background a few shown through and had my full attention. Chasing the Red Queen is a quick read with an equally fast-paced plot, yet will still give the reader enough time to establish a connection to the story, characters and paranormal features.