The Danger of Immortality

The Immortality Trigger is, what I consider to be, a large scale thriller. There is a lot going on and it feels like so little time for the characters to do it in. How did you set about writing this novel and what did you want to achieve?

The book was to be a standalone with immortality at its core. But as I thrashed a first draft, I realised there were subtle elements in The Apocalypse Trigger, which could be fleshed out very nicely into a sequel. And then the title of the book clicked and I thought, that sounds good. It began as a simple revenge thriller, picking up with Fortesque and Wei Ling, then grew into a more complex story of redemption, unfinished business, the danger of immortality. I’m quite happy with the finished product even in terms of the story construct. I’ve experimented with flashbacks, revelations, suspense, a twist – new for me. I’m still learning the craft.

The characters in this novel are interesting, well developed, and varied. What character did you enjoy writing?

I enjoyed what I did with the protagonist, Luc Fortesque. Readers of The Apocalypse Trigger (the prequel), will be surprised I selected Fortesque to continue the series. He’s basically a guy who’s in the wrong place at the wrong time, and believes life has been unfair to him. That has set him on a path that the world would frown upon. In this book, I want Fortesque to discover his old self – the glimmer of good in him, and wanted the readers to also feel sympathy for him.

The different factions in this story were an interesting mix. What were some themes you tried to capture while creating the different groups in your novel?

For Luc Fortesque, the anti-hero, I wanted the theme to centre around self-discovery and redemption. I’m fascinated by this aspect of human nature. For the villain, I wanted to debunk the grandeur of immortality. Personally, I think it will be a mess if we discover immortality. For the Nazi hunters, I wanted to portray the guilt of false accomplishment. And finally for my masked drug lord and vigilante, I called upon our pop culture of masked heroes and villains. I’ve tried to reduce the prominence of the US in the whole book – there are too many thrillers with an American hero.

The next book introduces a new character, and a new series. I’ve selected a very unlikely nationality for my character because I felt the people of that nation are heroes in their own way. The book is tentatively titled, “LION”, and is due 2018. After that, is the third book in the Ingram series (Haunted, Diablo). That is due 2019. 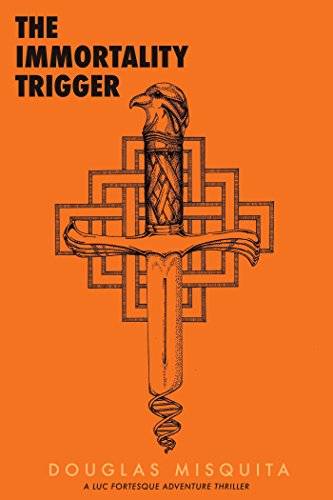 The Vesuvius Group is destroyed. But not all secrets perished… and none as desirable as the Secret of Immortality. The key to the enigma was unwittingly killed in an Allied raid on a Nazi stronghold in 1945… officially.

Allied paratroopers raid a secret Nazi research facility. The operation is reported as a success. But, the lone survivor, Benjamin Ezra, knows otherwise.

A drug lord, El Fantasma threatens to plunge Colombia into an era of bloody drug wars. DEA Country Attaché, Zachary Mason is in charge of a covert operation to remove El Fantasma, with the help of a vigilante, El Angel, and a retired undercover agent, Raymond Garrett.

In Naples, INTERPOL agent, Sabina Wytchoff, is investigating the death of her parents, when the Wytchoff family’s association with an ancient cabal comes under investigation.

After the events of The Apocalypse Trigger, Luc Fortesque, is scouring the world for the man who tested experimental drugs on him.

Their paths will converge… violently… and conclude the mission that began in 1945.