You Have The Right to Remain Silent

Mark Bello’s You Have The Right To Remain Silent follows the grisly case of a man who is murdered in a particularly brutal fashion. Bradley Crawford, a two-term congressman, bleeds to death after being castrated by an unknown woman. Renowned ‘King of Justice’ Zachary Blake is brought into this case as a favor, and his role is to defend Mia Folger, the victim’s wife.

The evidence against Mia appears damning, and soon the entire public seems convinced of her guilt. However, as more revelations about Mia and Bradley’s turbulent relationship are revealed, it becomes clear that Zack has an almost impossible mission on his hands, and the stakes couldn’t be higher.

This police procedural is not for the faint-hearted with explicit gore and graphic images. The plot is fast-paced and gripping, with sharp dialogue and interesting character dynamics. The most well-developed characters are Zack Blake, the charismatic hero, and his ally on the case, Dr. Rothenberg, who showcases a quieter yet equally compelling brand of masculinity.

Shari Belitz, the team’s jury consultant, has personality and fire, and she is the feisty counterpart to Blake. Mia Folger, arguably the most psychologically complex female member of the cast, is rendered catatonic and unable to speak for much of the story. The murderer, whose feelings about killing are ‘borderline orgasmic,’ is a complex, scary, and unpredictable character. The killer represents pure evil and has excellent emotional depth especially considering the manner in which they dispatched their victim.

You Have The Right To Remain Silent has a cast of characters that are well developed, the story’s pace is just right, and the story is well written. I highly recommend this novel to fans of a good thriller and detective novel. It makes the legal processes involved in a murder case digestible, with a sense that action is never far away.

Betrayal at the Border 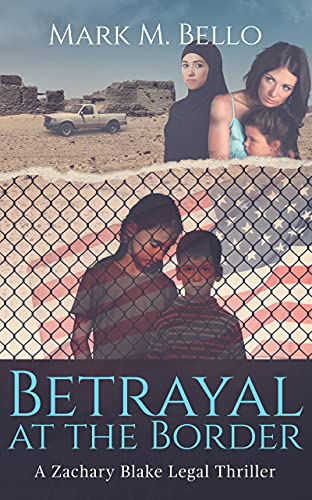 Betrayal at the Border by Mark Bello is a fast paced legal thriller set predominantly in the United States. It is the seventh book in the Zachary Blake Series.

Bello addresses some important and timely issues in this book – namely the United States’ immigration policies and human rights issues. He raises awareness of these issues by telling the compelling story of two immigrant families, and their treatment at the hands of the US immigration system. These are interesting and pertinent themes and should appeal to a wide range of readers.

There are numerous characters in the book, including star lawyer Zachary Blake, the two immigrant families and a host of supporting characters. Zachary’s character is well developed and feels like an authentic portrayal of a lawyer, although a lot sharper. Miguel and Mary Gonzalez are authentic characters as well; their jobs, home and children are all well described and draw the reader into their heartbreaking story. The characters of Canan and Karim Izady are less developed and I would have enjoyed seeing more of them.

I really enjoyed the well developed scenes in the book. The story takes us to other countries, but the story is predominantly in the U.S. and I was absorbed in the scenery. The Gonzalez children find themselves in poor living situations and the descriptions draw the reader into the story and allow the reader to develop empathy for their plight. This is a legal drama novel, but I never felt overwhelmed or lost by the jargon thanks to excellent story telling that focuses on characters rather than technical aspects of law.

Betrayal at the Border is a fast-paced legal thriller that tackles contemporary issues with stunning legal drama. The authors experience as a lawyer really comes through as the law, as it is portrayed in the book, always felt real, which for a layman like me made the stakes feel palpable. Fans of John Grisham novels will find plenty to enjoy in Mark M. Bello’s enthralling legal thriller.

Betrayal at the Border – Book Trailer

Supreme Betrayal by Mark Bello follows a young woman who, after a rare night out, is viciously attacked at a party. Frightened and alone, she manages to get away but has to stumble through a party practically nude due to his brutality. Years later, her attacker is in a position where he would be able to do what he wants and hurt who he wants as a judge on the supreme court. However, Hayley’s got a plan. Will she get the justice she so deserves?

This book wastes no time getting to the heart of the drama and in so doing ensures that you are enthralled right from the beginning. No warning, just bam! Right in your face. But it has to be that way to convey the full weight of what happens to Hayley. Many teenage girls find themselves in dangerous situations and at the mercy of certain men who crave power. Bello portrays Hayley as a strong and tenacious character that is empathetic and is easy to empathize with. She’s a character that always felt authentic and one that I was rooting for throughout this riveting book. Oliver’s character is, of course, upsetting, pretending that he has a perfect life and that he’s a gentleman when he’s anything but the perfect gentleman. I would say that I hate his character, but it is because his character is so vividly developed.

The book’s themes are heavy but handled in a respectful manner while still being entertaining. I felt a connection with Hayley and wanted her to find peace and wanted Oliver to face justice so that he wouldn’t hurt innocent women and ruin their lives. I felt like this would make a great Lifetime Network Movie as the drama high and the emotions are palpable. The author was able to piece together a story that is both engaging and rings true because of real events that happen to people.

Supreme Betrayal by Mark Bello is an engrossing legal thriller that is hard to put down and even harder to forget.