It’s About the Chaos

The Game Changer revolves around the life of creative businessman Henk who finds himself in trouble after an art robbery takes place in the heart of Rotterdam. This book is a genre-crossing novel with elements of a romance, crime, and art history as well. Did you start writing with this in mind or did this happen organically as you were writing?

Thanks first for all the time and effort to read my book. This is a very good question and maybe therefore not easy to answer: it’s both in a mixture I would say. I started with some basic ideas and investigations, did some research on the subjects and meanwhile, on the other hand, write highly intuitive. Then I switch from these two mindsets every now and then, like in a loop that rolls forth until you get the feeling it’s almost finished. I certainly have no idea how it will end when writing and I am surprised at times about the direction the novel or characters takes… so then I change the research and idea’s to be able to go on a bit further. In the end, it takes a lot of editing, and in this process the book is also enriched a bit, blended.

The relationship between Henk and his daughter Julia is intriguing and risque. What was the driving ideas behind these characters traits and relationship?

Emancipation and seeking of one’s identity/freedom of Julia and maybe also the idea that world problems might need to be solved by women. But in this novel, it’s mainly about Henk, the businessman whom you might in some ways see as a Donald Trump kind of guy (thinking now of the open letter I read on the website of Michael Moore written to Ivanka Trump: ‘your dad is not well’, but it’s written after writing my novel). It’s about the chaos in Henk’s mind, the obsession of dominating, maybe caused by fear of women taking over power, confused with and entangled in the love for his daughter.

There is some fantastic art history in this novel. Was that intentional? Did you have to do research for this book?

Yes, I did quite some research, but in the intuitive writing process most of it is done for nothing probably, you never know for sure. The general idea I guess is indeed that art can maybe help us, it’s an investigation if so and if the answer is yes, how this can be done. What role can art play, seen from the viewpoint of the eighteen-year young Julia. She wants art to be decisive.

Why did you choose Rotterdam as the setting for this novel?

It’s close to my hometown, Vlaardingen, and plays a major role in the area where I live, historically and still from this day on, although the work in the harbour gets more automated nowadays. Furthermore, I would like to emphasize that Elias Canetti’s Auto-da-fe (‘Die Blendung’), written in 1935, was an inspiration for my novel, mainly regarding the atmosphere. As a tribute, I mentioned his name once deliberately within the novel in the middle somewhere, as well as using the term ‘stipendium’, which I came to know reading this novel and ‘Masse und Macht’. I consider this novel my personal and modern ‘die blendung’.

The next book is all about Julia, Henk his artistic daughter. At this point in time I feel that it can still take a while before it will be finished, although there are more than 100k words written and severely edited so far. I tend to be rather ambitious regarding goals and ideas of a new book I guess, so to finish it, to pull it off is unsure: it might not work at all. Especially since the new novel will partly be science fiction, playing in 2050, I wonder if I will manage.

Sneak preview of the new novel:

The floating pavilion called The Game Changer, peacefully located between the landscaped garden and artistic attributes crammed with solar – panels, foils and conductive basins along the eaves – is virtually deserted, a rarity. As if Providence feels there is something special happening since I will,  after all these years, speak privately with her. After several decades, the moment finally arrives. The ring gives an orange signal, I will have to do sport for half an hour the least, followed by a silent meditation to bring my blood pressure and pulse combination back to acceptable levels. The nerves vultures in my throat, my nasal breathing is irregular, but I consider it too late for intense exercise; I can at best apply a short-term yoga technique, click the ring signal back to inactive and start enjoying the view. In the distance I see a dot rising, it could be the amphibian taxi, one that brings her to this magnificent pavilion, two miles off the coast of Hoek van Holland situated in the North Sea, a sea largely transformed into a sea farm: one big floating habitat of many thousands of hectares. It remains beautiful to see how the east side of our integrated Maasvlakte has become a place for handling assembly of environmentally friendly products surrounded by renewables and encapsulated between tens of thousands of wind turbines, seaweed farms and solar generating systems with modern forms of salt mining. We are a leader in the world, people! Mom will not believe her eyes. In a country like the U.S.A., they are still jealous; they have looked with uttermost suspicion at our ultra-modern business, our activities that saved the planet and ourselves, mankind, from The Great Catastrophe. 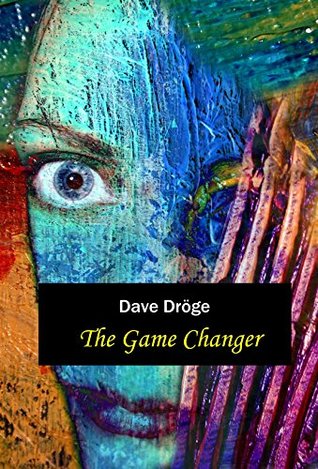 The Game Changer, written by Dave Dröge and set in Rotterdam, revolves around the life of creative businessman Henk van Wijnen-Swarttouw. Henk finds himself caught up within a web of trouble with the law after an art robbery that takes place in the heart of Rotterdam.

Meanwhile Henk’s daughter, Julia, attempts to reach for liberty and human rights through art that is confrontational and provocative. She showcases her talent within her parents art gallery, located in the famous Witte de Withstraat. Henk’s clear distaste for Julia’s “shock value” art drives a dividing wedge between father and daughter and he becomes obsessed with knowing every aspect of Julia’s life.

Through the help of German psychiatrist Von Stürmer, Henk and his daughter must come to grips with understanding her desires for a green sustainable future, whilst facing investigation on his own business practices.

Dave Dröge’s words are enriched with an artistic flair that allows the reader to feel as though they are more than just a spectator in the story of flamboyant Henk van Wijnen-Swarttouw. A mixture of modern era and a touch of old school, The Game Changer allows the reader to easily picture the charming life within Rotterdam. The wine, decadent buildings and lively characters of the novel piece together a picture of beauty and intrigue.

If you enjoy an element of lust in your novels, The Game Changer will satisfy your needs in an elusive room 33. However the relationships in this novel are often short lived and instead the novel draws focus towards the father-daughter relationship and the relationships with Henk’s business associates. Secret meetings, codes lined with dark, red leather and a detective are all part of the mysterious circumstances surrounding art and business.

Henk’s daughter Julia is a free bird, a lover of all things green and a passionate advocate for creating a green, sustainable future. Julia has plans to go to medical school however during her sabbatical she uses her father’s art gallery to display her provocative art. In retaliation, Henk becomes obsessed with his daughter as he fights to control every element of her life. This sometimes leaves the reader feeling slightly uncomfortable as he borders the line between concerned father and an obsessive stalker.

The Game Changer switches between first and third person easily in order to portray various characters points of view. Cor Figee, an account manager, is one character that I came to admire due to his unwavering moral compass, even in the face of adversity. Figee’s neighbour, Elenoor, is handicapped and with her low IQ is often the target of bullies and Figee heroically defends her- even if he needs to cross cultural boundaries. Hard working, he establishes himself with Russian businessmen and creates an honest lifestyle for himself and soccer mad son, Daan.

Many of the characters find themselves stumbling through life and the excessive drinking implies lavish lifestyles of ordinary folk, such as Johanna the barmaid. She indulges in liquor and is almost sycophant to Henk but proves her friendship to Henk loyal when the time arises. Henk’s German psychiatrist, although small in stature, proves to be an integral part of reviving the relationship between father and daughter.

Best read with a pot of fresh mint tea, I would recommend this for anyone who is interested in learning about life within Rotterdam whilst indulging in a spoonful of romance, crime and art history.