← The Nefarious, Noble and Nocturnal
The Conflicts That Followed →

“The Taming of Adam“ follows a prickly teen named Adam. While he attends college studying black magic he goes out of control, gets arrested and is forced to face his shortcomings. What were some themes that you felt were important to highlight in this story?

This might sound horrible (probably because it is), but I’ve always been kind of interested in the school-shooter phenomenon, especially the Columbine incident. I wonder what those two young men went through and why they decided to do what they did. Did life truly not seem worth living?  Did counterculture somehow help them come to their decision?

By the time I wrote “The Taming of Adam,” I already did two novels, and I decided to try something unique and risky:

A story about a man who could become a school shooter.

It didn’t have to be an urban fantasy story, but fantasy is the genre I’m most interested in. Of course, Adam’s situation is very different from a typical real-world school shooting, but he is a very antisocial guy with sociopathic tendencies–someone who might think little of going on a carnage spree. The message of the book is that you can find friends even in unlikely places, and that it’s better to indulge in the love and care of friends and family than go at the world alone. It’s corny, yes, and I’m not sure it would reach a sociopath, but it might help more than hurt.

Are you a fan of the fantasy/paranormal genre? What books do you think most influenced your work?

I’ve read a lot of fantasy books over the last few years mostly thanks to my Kindle, which can get me obscure books right at home, but before I wrote ToA, I mostly read Stephen King books and a handful of fantasy books. The works of Stephen King were a great influence, as well as Harry Potter of course, but there’s also a bit of Star Trek in there, too. I love how fantasy and horror can make for very adventurous books that break the rules of reality to be fully realized. On the other hand, to be honest, I am a little disappointed to see so many fantasy stories rely on cliches such as “The Chosen One,” “The Great Holy Artifact,” and “The Prophecy That Gives Sufficient Motivation.”  These cliches can more or less cheapen a story and rob characters the chance to be endearing and relatable.

Adam starts out as an unlikable character. He’s a jerk to everyone, even his friends. What is one pivotal moment in the story that you think best defines Adam? Did any of the characters development occur organically through the story?

Adam is a pretty sensitive guy who went bad due to a bit of a traumatic experience as a child. He wants to live in his own little world where nothing and no one can hurt him, and he keeps telling himself that not even his family is important to him. But when he makes his sister cry over a matter of his own making, he gives her a hug, realizing that he wouldn’t want to be treated as he had just treated her. Another pivotal moment is when he reveals his feelings about the opposite sex to Naomi. They’re feelings he’s always been aware of, yet this is the first time he’s put them into words to anyone. If Naomi simply got disgusted and called him names, Adam would have probably stayed the same and refused to open himself up any further. But just getting his feelings out and not getting a huge backlash gave him the opportunity to reconsider his position on life. I’m not sure if any of the other characters changed with the story, but I like to think Russell was pretty brave in talking to Adam, a guy who had just assaulted him, while other people would have advised against it.

This is part 1 of “The Taming of Adam” series. Where does the story go in the next book and where do you see it going in the future?

Parts 2 and 3 are now available for digital download. In Part 2, Adam attends a school in a new city.  He gets serious with a woman named Amy who gradually makes him a better person without him knowing it. But there are some people behind the scenes with a sinister agenda, and they happen to have some connection with Adam’s past. There’s another character named Ricky whose unique perspective helps to clarify things.

Part 3 is the most ambitious and epic installment of the series, involving gods and time travel, and it puts a new spin on the title “The Taming of Adam.” Can’t say much more without going into spoiler territory! 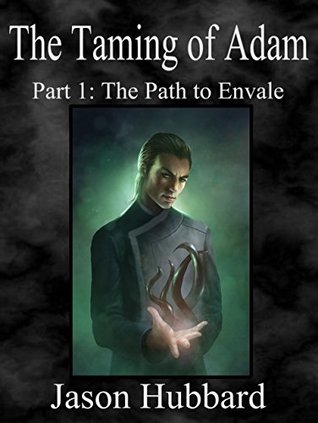 Meet Adam Taylor. He is a black mage: a magic-wielder who draws power from the essence of shadows. He is also a loner who prefers only his own company and dreams of power simply to make a living with it. He shuns and pushes away others, making him an extremely rude and antisocial miscreant. On the inside, though, he is a sensitive soul who doesn’t quite know the meaning of love and friendship.

Gene London, meanwhile, is a famous attorney who has a knack for defending difficult cases. He is also a government lobbyist who speaks to lawmakers on behalf of corporations (a normally legal profession as long as he doesn’t give lawmakers luxurious gifts … which he regularly does). Lately, he’s been seeing a mysterious person whom he calls “the lady in the mirror.” This lady claims she is trapped in another dimension, and she says that if London finds a way to free her, she will be his forevermore.

Little did Adam know, on the day he did something foolish and horrific, that he was setting himself on a course to a meeting with the dastardly Gene London … and setting in motion a series of events that will change him for better or worse.

← The Nefarious, Noble and Nocturnal
The Conflicts That Followed →