← The Conflicts That Followed
The Game Changer → 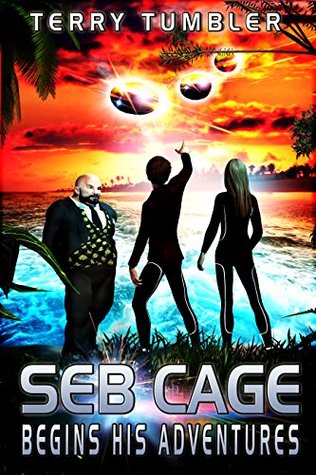 Book 1 of the Dreadnought Collective series begins in Spain, where Sebastian Cage and his younger brother Bart arrive to spend the summer with their grandparents. Terry and Sandra Tumbler have plenty for them to do, with sporting activities and swimming to keep the boys active and burn off their boundless energy. Despite this, the rivalry between the brothers starts to fray their grandparents’ nerves, so Terry devises a plan. He enlists thirteen-year-old Sebastian as his research assistant for a secret project. Terry has noticed a larger-than-average number of little people in his town and is convinced they are aliens.

Seb’s intelligence and tenacity are put to good use. Seb and Terry’s set out to observe and follow people under five feet tall as they move about town. The pair’s activities are noticed, and a man named Skip approaches Seb and Terry and confirms their suspicions. Skip and his organization – the Sombrella Syndicate – aren’t hostile at all. He invites Seb to join their summer campus to learn special skills and advanced technology. Terry is skeptical, but he can further his research than getting the information straight from the source, even if he has to get the data by tricking his grandson.

Seb Cage is intended for middle-grade readers and offers a fantastic, “what I did on my summer vacation” adventure story. Seb must cope with discovering and controlling abilities he never knew he had, making friends with his fellow students and focusing on his education. He must also work in tandem with his partner Maisie, and develops a crush on her.

His uncertainty and awkwardness over Maisie, coupled with constant teasing from his younger brother, makes it easy to sympathize with Seb. He faces some issues that tween and teen readers will be familiar with. He’s essentially joining a new school and is soon surrounded by a group of young people his own age who come from all over Europe. He must learn to deal with embarrassment, mistakes, and successes, as well as bond with his classmates and learn from mentors who are very different from any teacher he’s had before.

The humor in the book is delightful, with a distinctly British feel. Some of it is word-play, with funny scenes (mostly involving Seb’s grandfather, Terry) that range from misunderstandings and mishaps to literal bathroom humor. Since the students and mentors are telepathically linked, the occasional stray thought slips through to hilarious effect. This kind of comedy plays through the whole story, keeping the mood light and the story moving.

The students visit real historical sites, and the descriptions of these monuments, battlefields, and triumphs of ancient engineering are wonderful. The author provides an appendix of links to some of these fantastic places that inspired the story.

Seb Cage Begins His Adventure is well-suited to readers from 9-14. It’s full of adventure, science fiction, and fantasy and will also appeal to youth who enjoy sports and exploration. The novel features strong themes of friendship, discovery, and learning to care for others and the planet Earth as well.

← The Conflicts That Followed
The Game Changer →