Seasons: Once Upon My Innocence 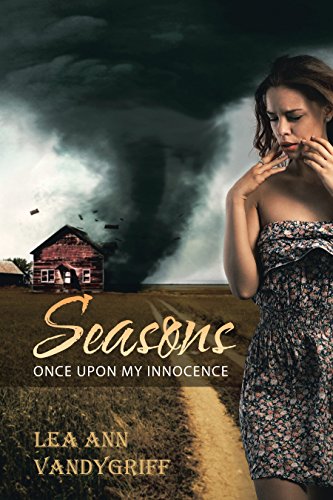 The first chapter of Lea Ann Vandygriff’s book, Seasons: Once Upon My Innocence, is entitled “A Quiet Little Town.” That’s exactly what Rhinehart is. Rhinehart is a southern ranching town where everyone knows everyone else and everyone else’s business. It is Mayberry-like and seems picture-perfect until things go a little off the rails. A tornado and a few menacing characters sweep through town wreaking havoc on the townspeople and shaking both their homes and their faith. Especially shaken are the town’s younger citizens who can’t reconcile one question in their young minds. “Why does God let bad things happen to good people?”

Vandygriff takes us through a season of disaster, desperation, hope, and forgiveness within this close-knit community. It seems like every time one thing comes together, something else falls apart. We are introduced to a cast of characters that range from sweet, Godly, and endearing to violent, neglectful, and unstable. Fortunately, there are more former than latter. Most of the book seems to center around 8th grader, Aubree, her brother Randy, and their parents, Clyde and Dolores. A large focus is also placed on a trio of brothers who have been dropped into the lap of their elderly grandmother.

Many parts of the book made me long for a time when neighbors were more than the people we wound up living beside. They were family. They were there at a minute’s notice to help with whatever was needed. Whether it was cleaning up after a tornado, helping an old lady with her groceries, or befriending the new kid with a bad reputation at school, the people of Rhinehart stuck together through it all. Being raised in a small, southern town myself, I found myself identifying with the town and the people. I saw myself and my family in the characters.

Vandygriff weaves a lot of scripture into her writing. Those who have suffered tragedies in the book are directed to the Bible for answers. Every meal in Aubree’s house is blessed. Prayer is always the answer. Church is a big part of the community. Aubree and her middle school friends find it so hard to comprehend why God lets bad things happen. They are always directed to the Bible and particular verses for answers, and reminded that forgiveness is a huge part of being a Christian.

One particular scenario did bother me in the book. Without going into too much detail, a man abused a young girl. There were no consequences for him. He was forgiven with hardly a blink. There was no accountabilty and no amends made, yet he was still allowed to be around the girl and her family as usual. I wouldn’t have been as forgiving. It was explained as the Christian thing to do, but I don’t know if readers will be able to reconcile themselves with this part. I couldn’t.

That being said, there are plenty of breaks thrown in to lessen the weighty themes the book contains. Plenty of comedy is exchanged through family dynamics and middle school friendships and drama. Often, situations in the book start out as tense and serious, but end with characters laughing. This eases the calamities and stress that the characters find themselves in.

There are some parts that are left intentionally unresolved. Some problems reintroduce themselves on the last page of the book. It is left open-ended. It definitely begs for a sequel.

I will say that there were several spelling errors that I think could have been caught with another once-over by an editor. I also had trouble, at times, pinpointing the era it is set in. Party line telephone circuits are mentioned, but other things seem much more modern in the story. Otherwise, the story seemed to flow well. The characters and the messes they find themselves in are interesting. I’d love to see what happens to the townspeople of Rhinehart next!